The unemployment rate for African-Americans is almost 17 percent and some black Democratic leaders have complained that Obama isn't doing enough about it.

"We've created 2.4 million jobs in the private sector over the last 18 months. We've got more to do. And President Obama has appealed to the Congressional Black Caucus and the attendees last night to close ranks, stand behind him, press on to make sure that we can continue to push for things like passage of the American Jobs Act," she said in an interview on CBS's "Face the Nation."

Reince Priebus, chairman of the Republican National Committee, argued employment rates are not better than they were three or four years ago and said it's Obama's fault.

"We're going to have a rigorous debate in this country on our side of the aisle. We're going to put up an articulate, intelligent alternative to this president," Priebus said.

Poll: No confidence in GOP front-runners

Romney, the former governor of Massachusetts, won Sunday's Michigan straw poll in the state where he was born.

"Seventy percent [in Florida] voted against the two front-runners. It was a vote of no confidence. And Perry, I think, because of his really poor debate performance, but also Mitt Romney, who spent a lot of time in Florida over the last five years, to get 14 percent isn't very strong. So I think these are very weak front-runners," said Bill Kristol of "The Weekly Standard."

Fox News senior political analyst Brit Hume said that even Cain's success in the poll might be short-lived.

"[Cain] tried hard in this. He gave a stem-winder speech. He's a marvelous stump speaker, and it seems to me he gets a moment out of this, but I cant imagine that it's going to last very long," Hume said.

Hume said that while Perry has a chance to recover from Friday, he has some improvements to make in his debate performance.

"I think Rick Perry's position on allowing graduates at Texas high schools, even if they're illegal immigrants, to go to college with in-state [tuition] is defensible. The problem is, he didn't defend it," he said.

The prisoners were shot following a prison riot over poor living conditions and restricted family visits in June 28, 1996, the officials said.

Dr. Salem Fergani, a committee member of the NTC, said there is much to be done to reach the truth of the killings, CNN reported Sunday.

" To be honest, we were not prepared to deal with such human massacres, so we request the assistance of the international community. We need specialists in the field to help us in identifying the victims ... this is a national mission. The families of these victims have the right to learn the truth about their deceased sons," he said.

Former guards at the prison Abu Salim prison led officials to the mass grave and provided details of the massacre Aug. 20, CNN said.

RAMALLAH, West Bank, Sept. 25 (UPI) -- Palestinian President Mahmoud Abbas told a cheering crowd Sunday that his successful mission to the United Nations was part of a long road to statehood.

Abbas arrived home in Ramallah from New York where he made a controversial request for Palestine to be recognized as an official state by the United Nations.

"Our international diplomatic resistance has begun and we have a long road ahead," Abbas said at his compound.

Abbas' request was opposed by the United States and Israel. Critics said changing Palestine's diplomatic status would derail the methodical four-nation negotiating process in the region and also add further credibility and clout to Hamas.

CNN said Abbas' supporters appeared to be solidly behind his move.

In an op-ed piece in the Fayetteville (N.C.) Observer, Mrs. Obama said she was inspired by the way the city came together to help Barbara Marshall, who runs a non-profit organization that assists homeless female veterans.

"Now, I know that not every community can build a home in a week, and not every veteran will end up in Disneyland or on national TV. But I also know that the compassion I felt in Fayetteville is alive and well in every community across this country," Mrs. Obama wrote.

The project that spruced up Marshall's home, which doubles as a resource center for her Steps N Stages Jubilee House group, will be aired Sunday.

Mrs. Obama encouraged Fayetteville to enjoy the television spotlight and then look into pitching in with JoiningForces.gov, a volunteer campaign created by the White House to assist military families.

"It's about Americans uniting in service around these families," Mrs. Obama said. "And it's about everyone -- no matter where they come from or their station in life -- stepping up to give something meaningful back."

Tough times for toros in Catalonia

BARCELONA, Spain, Sept. 25 (UPI) -- A full house of 20,000 was expected for Sunday's corrida at the Monumental bullring in Barcelona because it will be the final event ever held there.

In a victory for animal rights activists, the Catalan parliament voted to ban bullfighting last year.

Bullfights are a popular summer festival activity in large and small communities across Spain, but the number of fights has fallen by a third since the economic crisis began. The New York Times said the cost of the events has forced cancellations of not only bullfights but the entire festivals.

The slump has been particularly hard on the Spanish farms that breed fighting bulls. A number of such farms were opened recently as investment properties by businessmen who were thriving in the boom times a few years ago.

"A lot of bulls will just have to stay out on the field, which in economic terms is a disaster," said Leopoldo de la Maza, who has a farm in Andalusia. "Next year will be for sure as hard as this year, if not worse, because we already have to absorb with this year's excess supply."

The Times said fighting bulls sent to slaughter fetch only a fraction of the average of 6,000 euros ($8,128) a good combatant in a major city bullring normally brings. 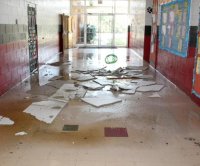