MORRISTOWN, N.J., Sept. 21 (UPI) -- Potential jurors in the trial of a man charged with killing a Catholic priest in New Jersey are being asked about their attitudes to the church.

The specific questions include one about the sexual abuse scandal, The Star-Ledger of Newark reported. Lawyers for both defense and prosecution agreed to the questions Tuesday.

Jose Feliciano, 66, of Easton, Pa., is charged with the murder of the Rev. Edward Hinds, 61, who was stabbed in 2009 in the rectory at St. Patrick's Church in Chatham, N.J. Police said Feliciano confessed to the killing, saying it occurred during a fight that began because he wanted to end an affair with the priest, while prosecutors say Hinds had discovered Feliciano had been convicted in Pennsylvania of molesting a girl and planned to fire him.

"These questions are not typical, but this is not a run-of-the-mill crime. There aren't too many priests getting murdered," Thaddeus Hoffmeister, who teaches at the University of Dayton Law School in Ohio and writes a blog about juries, told the Star-Ledger.

Jury selection began two weeks ago. People who claimed hardship have already been eliminated from the pool. 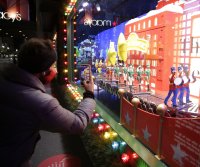 U.S. News // 1 hour ago
Gallup: Projected holiday spending ticks up, but far off 2019 season
Nov. 25 (UPI) -- Americans over the past month have increased the amount of money they expect to spend on holiday shopping this year, Gallup said in a survey Wednesday.

U.S. News // 8 hours ago
Republican group sues to block Wisconsin vote certification
Nov. 25 (UPI) -- Republicans in Wisconsin have filed a lawsuit asking the state's Supreme Court to block the certification of election results claiming that tens of thousands of illegal ballots were cast.

U.S. News // 11 hours ago
Lawsuit: CBP held dozens of minors for several days in the last 2 months
Nov. 24 (UPI) -- A new lawsuit accuses U.S. Customs and Border Protection of detaining dozens of children, including infants, at southern border facilities for longer than 72 hours, and some for as long as 18 days.