Rays of light burst off a building at One Liberty Plaza to silhouette two firefighters who are surveying Ground Zero at dawn on September 15, 2001 in New York City. UPI/Chris Corder | License Photo

NEW YORK, Aug. 16 (UPI) -- First responders who rushed to the disaster scene on Sept. 11, 2001, are not invited to this year's memorial service at Ground Zero, New York officials confirm.

The service is scheduled for Sept. 11, 10 years after the terror attacks.

In a statement, a spokesman for New York Mayor Michael Bloomberg, Andrew Brent, said the memorial is for victims' families, CNN reported.

"While we are again focused on accommodating victims' family members," Brent said, "given the space constraints, we're working to find ways to recognize and honor first responders, and other groups, at different places and times."

First responder John Feal said the decision to exclude first responders shows Bloomberg "lives in his own world" CNN reported. Feal is the founder of an advocacy group for police officers, firefighters, civilian volunteers and others who worked at Ground Zero.

"The best of the best that this country offered 10 years ago are being neglected and denied their rightful place," Feal said.

CNN said in addition to victims' families, several politicians -- including two presidents -- are expected to attend. The report said Bloomberg's office would not provide specifics on the ceremony arrangements, but noted first responders had not been invited to the preceding nine memorial services.

"Nonsense," said first responder Morris Faitelewicz, vice president of the Auxiliary Police Supervisors Benevolent Association. Faitelewicz said formal invitations were usually not sent in the past, but first responders have been able to attend all of the previous ceremonies by showing up.

He said specifically not allowing them to attend this year is especially galling, CNN reported.

U.S. News // 11 hours ago
FBI: Human remains found in Wyoming 'consistent' with description of Petito
Sept. 19 (UPI) -- Human remains have been found Sunday at a national forest in Wyoming where authorities were searching for a Florida woman who went missing during a cross-country road trip with her fiancé who returned home without her. 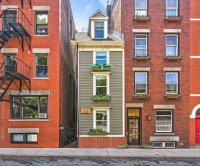