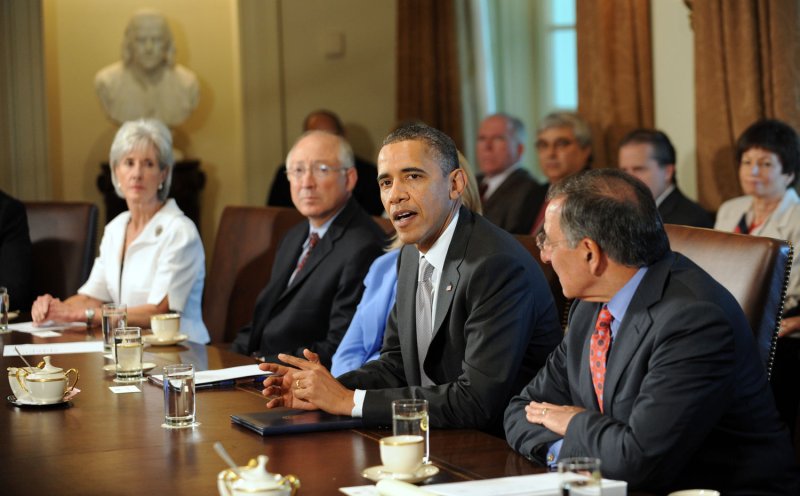 U.S. President Barack Obama holds a Cabinet Meeting in the wake of the debt ceiling crises in the Cabinet Room of the White House in Washington on August 3, 2011. From left are Secretary of Health and Human Services Kathleen Sebelius; Secretary of the Interior Ken Salazar; Secretary of State Hillary Rodham Clinton; Obama; and Secretary of Defense Leon Panetta. UPI/Roger L. Wollenberg | License Photo

WASHINGTON, Aug. 3 (UPI) -- President Obama called on the U.S. Congress to extend the operating authority of the Federal Aviation Administration instead of playing "some politics."

Congress has "routinely" passed authority extensions for the FAA, Obama said before going into a meeting with his Cabinet members.

"This time, Congress has decided to play some politics with it," Obama said. "And as a consequence, they left town without getting this extension done," leading to a partial shutdown of the agency.

Transportation Secretary Ray LaHood has been sounding the alarm about the lack of action, which resulted in thousands of FAA workers out of work, including safety inspectors, and FAA construction projects involving tens of thousands of workers across the country suspended.

"No safety issues will be compromised. Flying is safe," LaHood said. "Air traffic controllers are guiding airplanes. Safety inspectors are on duty and are doing their job. No one needs to worry about safety."

Obama noted the authority extension also allows the FAA to collect fees from airlines, which are still collecting the fees that are built into ticket prices, but keeping them. He said the federal government could lose $200 million a week in uncollected fees.

"So this is a lose-lose-lose situation that can be easily solved if Congress gets back into town and does its job," Obama said. "The House and the Senate could, through a procedural agreement, basically do this through unanimous consent."

Senate and House Democrats placed blame for the mess at House Republicans' feet.

The House passed a bill last month to extend FAA financing through Sept. 16 and allow it to continue collecting fees. But the House bill also would end $14 million in subsidies that provided commercial airline service to 16 rural airports. Reid said Republicans were using the rural-airport issue as cover for an effort to change a recently instituted federal labor regulation that made it easier for unions to organize at airline companies.

The new regulation by the National Mediation Board -- an independent government agency that coordinates labor-management relations within the railroad and airline industries -- says union-organizing elections should be decided by a simple majority of those who vote.

Noting that there have been 20-plus extensions previously, Reid said, "That wasn't good enough for them this time.

"They had to try to hold a number of issues hostage, as they have done with more than 300 million Americans in recent days," Reid said.

He called on House Speaker John Boehner to end the situation.

Reid said it was "outrageous" for people "desperate for being told they can't because, once again, the House Republicans, rather than legislate the way we've done around here for a long time, feel they have the empowerment to hurt individual people."

"Unfortunately, Republicans continue to practice the politics of confrontation and hostage-taking. And it is severely damaging our economy and the livelihoods of people across our nation," Hoyer said.

Sen. Jay Rockefeller, chairman of the Senate Commerce Committee, and whose state would lose one of its rural airports, said the union issue is a non-issue because the bargaining relationship between a private company and a union "is not something that the FAA discusses."

"You cannot have in an FAA bill, you cannot take it up, a union contract with a private company. Can't do it. It doesn't belong in a bill," Rockefeller said.

Rockefeller said what's needed -- and what he's offered -- is a clean bill of extension, which would end the partial shutdown but not address labor or rural air service issues.

A clean extension bill, Rockefeller said, means "you'll talk, but you're not going to be told what you're going to talk about."

U.S. News // 3 hours ago
Black Friday crowds sparse as shoppers adapt to pandemic
Nov. 27 (UPI) -- The massive shopping crowds that have traditionally followed the day after Thanksgiving were missing Friday as businesses across the country made changes to adapt to the coronavirus pandemic.

U.S. News // 18 hours ago
TSA screens 5 million passengers in week before Thanksgiving
Nov. 26 (UPI) -- More than 5 million travelers were screened by the U.S. Transportation Security Administration between Friday and Wednesday amid the Thanksgiving holiday.

U.S. News // 22 hours ago
Donor sues pro-Trump group to recoup $2.5M in failed election lawsuits
Nov. 26 (UPI) -- A North Carolina businessman and Republican donor filed suit in federal court saying he was duped by a Texas group that claimed they would file lawsuits to uncover election fraud on behalf of President Donald Trump.