Lawyer gets 4 months for lying to FBI

AKRON, Ohio, Aug. 2 (UPI) -- A Cleveland lawyer was sentenced to four months in jail Tuesday for his part in a case-fixing scandal involving a former Cuyahoga County auditor.

O'Malley, 45, who pleaded guilty to lying to the FBI, apologized for his actions.

"In a blink of an eye, I changed myself from a hardworking attorney to a criminal defendant," he said.

Frank Russo, who served as Cuyahoga County recorder before winning election as auditor, has pleaded guilty to 21 counts and could be sentenced to more than 20 years in prison. Steven Terry, a former judge in the Cuyahoga County common pleas court, was convicted in June of corruption and also is awaiting sentencing.

O'Malley was a longtime friend of Russo and worked for him as both recorder and auditor.

U.S. News // 3 hours ago
Biden expected to announce diplomatic boycott of Winter Olympics in Beijing
Dec. 6 (UPI) -- The White House is soon expected to announce a diplomatic boycott of the upcoming Winter Olympics in China as a show of protest over a number of issues, most notably human rights, according to news reports Monday. 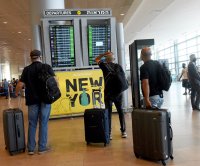 U.S. News // 20 hours ago
Developing storm may bring breath of winter to Northeast
AccuWeather forecasters are intently tracking a developing storm that could potentially bring a wintry mix to parts of Northeast and steady rainfall along Eastern Seaboard as the second week of December gets underway.
Advertisement