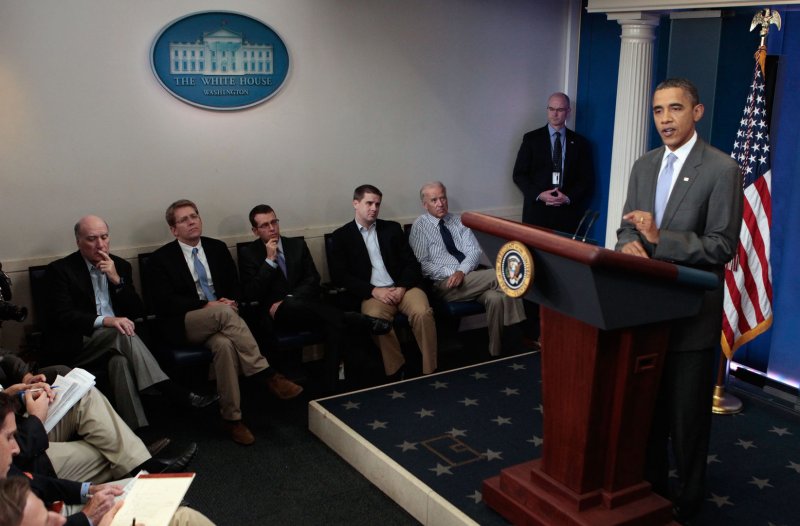 U.S. President Barack Obama speaks on the debt limit impasse from the briefing room of the White House on July 31, 2011 in Washington, D.C. Obama indicated that he and Republican members of Congress have reached a compromise to solve the debt limit impasse prior to the August 2 deadline. UPI/Somodevilla/Pool | License Photo

WASHINGTON, Aug. 1 (UPI) -- Consensus can be reached on job-creating bills despite harsh words spoken during the debate on raising the U.S. debt limit, a White House spokesman said Monday.

"I think it's important to remember that the president, publicly and vocally, talked about endorsing the idea of including an extension of the payroll tax cut as a grand bargain or a big deal" for raising the debt ceiling and lowering federal deficits, Carney said during a media briefing. "[There] is no question that he will continue to push for this. And he will make the argument that it is absolutely essential to continue to put extra money in Americans' pockets as they deal with high energy prices and high food prices next year as -- because it was so important this year."

He said the administration hopes to build on the spirit of compromise that resulted in a framework that would raise the debt limit and cut the underlying federal deficit.

"So looking forward, we hope to be able to build on that," Carney said. "And we believe fundamentally that there is broad consensus in Washington that we need to focus on growth and job creation."

U.S. News // 3 hours ago
Rescuers save 2 people from plane dangling from power lines
Nov. 28 (UPI) -- Rescuers in Maryland early Monday successfully extracted two people from a plane that was dangling 100 feet above the ground from a transmission tower in the city of Gaithersburg, authorities said.

U.S. News // 5 hours ago
Houston issues boil water notice; some schools to remain closed Monday
Nov. 28 (UPI) -- The City of Houston has issued a boil water notice to its millions of residents after water pressure in its main system dropped over the weekend, prompting several school districts to cancel classes for Monday.

U.S. News // 9 hours ago
Rescue mission underway for occupants of plane dangling from Maryland power lines
Nov. 27 (UPI) -- Authorities were working to extract a pilot and a passenger from a small plane dangling 100 feet above the ground Sunday night after it crashed into power lines in Maryland.

U.S. News // 18 hours ago
Storm with high winds, colder air to blast across Midwest, Northeast
More than 125 million people from the Midwest to the Northeast could face disruptive wind gusts from a powerful storm system from Tuesday to Wednesday.

U.S. News // 18 hours ago
Severe weather to threaten 25 million from Texas to Illinois
Approximately 25 million people in the south-central United States will be at risk for severe thunderstorms on Tuesday alone.