"There was a shooting at a political camp, which sounds a little like, you know, the Hitler Youth," Beck said in the first minute of his syndicated radio broadcast Monday. "I mean, who does a camp for kids that's all about politics? Disturbing."

Torbjorn Eriksen, a former press secretary to Norwegian Prime Minister Jens Stoltenberg, described the comment as "a new low" for the conservative broadcaster, who has frequently been forced to apologize for offensive remarks and whose Fox News Channel talk show was canceled June 30.

"Young political activists have gathered at Utoya [Island] for over 60 years to learn about and be part of democracy, the very opposite of what the Hitler Youth was about," he told The Daily Telegraph. "Glenn Beck's comments are ignorant, incorrect and extremely hurtful."

The Hitler Youth was a 1922-1945 Nazi paramilitary organization that indoctrinated boys ages 14-18 deemed future "Aryan supermen" in anti-Semitism, and emphasized physical and military training, so they would fight faithfully for the Third Reich.

The Coalition to Stop Gun Violence, a Washington-based campaign group, said the remark by Beck, a free agent after being forced out of the Fox News channel this year, was "absolutely disgusting."

At least 68 people, mostly teenagers, died in Friday's shooting rampage on the lake island of Utoya, 30 miles from Oslo.

Anders Behring Breivik, an anti-immigrant Christian extremist who also allegedly carried out an Oslo bombing shortly before, told a judge Monday he committed both acts to save the country from ruin and denied he was guilty of any crime.

In February Beck apologized to Reform Judaism, a movement that seeks to modernize and liberalize the Jewish faith, after comparing it to "radicalized Islam."

Beck's own 9-12 Project, which seeks to "recapture the spirit of the day after America was attacked" Sept. 11, 2001, includes children's summer Patriot Camps "to provide heritage-based education for youth," a United Press International review of the 9-12 Project Web site indicates.

Critics allege the 9-12 Project advocates a theocracy and exploits the Sept. 11, 2001, terrorist attacks on the United States for political gain. The group is supported by the Tea Party movement.

In addition, organizers of the Vacation Liberty Schools in several states told the Telegraph they taught children as young as age 8 a Tea Party-endorsed curriculum spanning religion, economics and political principles.

Conservative columnist Jeff Lukens, whose Web site says he "writes about the traditional and Christian values upon which America was founded," created a political camp in Tampa, Fla., that aligns itself with Tea Party values, the Los Angeles Times reported.

Neither Beck nor his syndicator, Premiere Radio Networks of Sherman Oaks, Calif., had an immediate comment on his remarks. 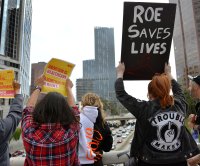 U.S. News // 9 hours ago
Abortion rights council calls on California to pay for out-of-state patients if Roe vs. Wade falls
Dec. 8 (UPI) -- A council made up of abortion rights and women's health advocates recommended Wednesday that California prepare to provide abortion access -- and funding -- to all Americans if the Supreme Court overturns Roe vs. Wade.