The bill will require people to prove U.S. citizenship or legal residence before they can renew or get a Texas driver's license, a measure that will affect almost all Texas adults, the Austin American-Statesman reported Wednesday.

Supporters of the driver's license policy say it will help combat terrorists and criminal activity by illegal immigrants, while opponents say it will force undocumented immigrants who have been in the United States for decades to either drive without licenses or face possible deportation to a country they might not know at all.

Currently, the rules of the Department of Public Safety, which issues driver's licenses, allow officers to ask a person applying for or renewing a license for proof of citizenship or legal status. Under the new law, DSP officers would be required to ask for such information from everyone.

Luis Figueroa, a legislative attorney with the Mexican American Legal Defense and Educational Fund, criticized the measure passed by both chambers of the Texas legislature Tuesday.

"Tying immigration to driver's licenses is going to continue to be a disaster," he said.

U.S. News // 56 minutes ago
Amtrak requests additional $1.5B in federal funding for coronavirus relief
May 26 (UPI) -- Passenger railroad service Amtrak on Tuesday asked Congress for an additional $1.5 billion in federal funds to help it maintain operations amid the effects of the COVID-19 pandemic.

U.S. News // 3 hours ago
Police: UConn student linked to killings may be traveling with ride-share services
May 26 (UPI) -- Police in Connecticut warned that Peter Manfredonia, suspected of killing two people, may be seeking to solicit rides from services such as Uber and Lyft as he attempts to flee the area.

U.S. News // 3 hours ago
4 Minneapolis officers fired after video showed man pinned by neck
May 26 (UPI) -- The Minneapolis Police Department fired four officers Tuesday in response to a video appearing to show one officer keeping his knee on the neck of a handcuffed man who later died. 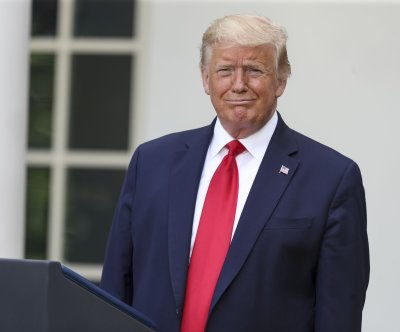 U.S. News // 5 hours ago
Trump announces plan to cap Medicare insulin copays at $35
May 26 (UPI) -- The Trump administration announced a plan Tuesday that will cap the cost of insulin for some senior Medicare recipients at $35 per month for the 2021 plan year.

U.S. News // 13 hours ago
Dow Jones surges 529 points as NYSE reopens trading floor
May 26 (UPI) -- The New York Stock Exchange floor reopened Tuesday to surging U.S. stocks after being closed for a little more than two months due to the coronavirus pandemic.

U.S. News // 7 hours ago
COVID-19: Supreme Court rules in favor of vulnerable Ohio inmates
May 26 (UPI) -- The Supreme Court on Tuesday declined to block a lower court's order requiring the federal government to transfer medically vulnerable inmates in Ohio to safer conditions during the coronavirus pandemic.

U.S. News // 16 hours ago
HHS watchdog defends coronavirus report criticized by Trump
May 26 (UPI) -- The former acting inspector general of the Department of Health and Human Services on Tuesday defended a report she issued a month ago that detailed severe shortages of medical supplies.