This Department of Defense photo taken on June 5, 2011 shows Defense Secretary Robert M. Gates as he meets with the unit command at a Forward Operating Base in Afghanistan. UPI/Cherie Cullen/DOD | License Photo

URBANA, Ill., June 21 (UPI) -- An Illinois professor specializing in international conflict says there are glitches in withdrawing U.S. troops from Afghanistan and history is not on our side.

With President Obama set to announce Wednesday evening at least a small drawdown, Professor Paul Diehl of the University of Illinois at Urbana-Champaign said the "major concern is the slow pace of progress despite the increase in U.S. troops and the significant development aid granted to the country."

Diehl is the Henning Larsen professor of political science, the author of books on both war and peacekeeping and directs the Correlates of War Project, the world's largest data collection effort on international conflict, an interview posted by the university's News Bureau Tuesday said.

Asked if he saw progress in Afghan stability, Diehl said: "Measured against the situation last year, there have been a number of incremental improvements on all dimensions. For example, violent incidents in Kandahar province have declined and the size of the Afghan national army has increased."

But some elements give Diehl pause.

"The major concern is the slow pace of progress despite the increase in U.S. troops and the significant development aid granted to the country," he said. "It is also not clear that improvements will necessarily continue in the future, suggesting that we might be approaching limits beyond which little progress is possible in the near future. Government corruption and poor quality local security forces remain sticking points."

Expectations for Afghanistan have been lowered, he said.

"I think that U.S. and NATO goals have become much less ambitious," Diehl said. "British Prime Minister (David) Cameron has said that we cannot expect 'a perfect democracy' in Afghanistan. The next U.S. ambassador to Afghanistan, Ryan Crocker, is even more circumspect, striving for 'sustainable stability.'"

Diehl said the time line for withdrawal may be determined by U.S. political factors.

"Scholarly studies indicate that 70 percent of attempts to impose democracies by external powers fail within two generations," Diehl said. "Among those that do succeed, key ingredients are the willingness of the occupying power to sustain its troop presence and support. There is no simple answer to how long a state can maintain such support, and indeed, the length of commitment required varies by context. Yet even a sustained commitment is not enough, as imposed democracies best take root in societies that are ethnically homogeneous and are surrounded by other democratic states in their regional neighborhood. Neither of these conditions characterizes Afghanistan."

U.S. News // 4 hours ago
Portland police arrest driver who struck 6 people
Jan. 26 (UPI) -- Police officers in Oregon have arrested a motorist accused of striking at least six people, including one fatally, with their car over a span of dozens of Portland city blocks, authorities said.

U.S. News // 5 hours ago
9 Houston officers charged in probe of botched 2019 raid
Jan. 25 (UPI) -- A Texas grand jury on Monday indicted nine Houston police officers, including one for murder, for crimes uncovered during an investigation into a botched drug raid that left two people and their dog dead.

U.S. News // 18 hours ago
Moderna says its COVID-19 vaccine effective in blocking new strains
Jan. 25 (UPI) -- Pharmaceutical company Moderna on Monday released new data that show its vaccine has proven to be effective against new, mutated strains of COVID-19 that first were identified in Britain and South Africa. 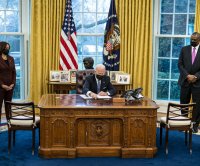