WASHINGTON, June 13 (UPI) -- The U.S. Supreme Court Monday, in a rare 4-4 tie, upheld laws that make it harder for an illegitimate child of U.S. father to become a U.S. citizen.

U.S. laws impose a five-year residence requirement, after the age of 14, on U.S. citizen fathers -- but not on U.S. citizen mothers -- before they may transmit citizenship to a child born out of wedlock abroad to a non-citizen.

A tie on the nine-member Supreme Court automatically affirms a lower-court ruling but sets no precedent. In the citizenship case, in which the United States was a party, Justice Elena Kagan did not participate -- having joined the court this term after serving as U.S. solicitor general.

The case involving an illegitimate Mexican son of a U.S. father was decided by a U.S. appeals court panel in California in 2008.

The son, Ruben Flores-Villar, filed suit against the laws under the equal protection component of the Fifth Amendment's due process, citing discrimination on the basis of age and gender. The suit attacked sections of the U.S. code that required a five-year residence on the part of U.S. citizen fathers, but not on U.S. mothers, before the transmission of citizenship.

The appeals court said it would follow the precedent set by the U.S. Supreme Court in 2001's Nguyen vs. INS, in which the justices said a section of the relevant law "did not offend the principles of equal protection."

"Assuming, as the [Supreme] Court did in Nguyen, that intermediate scrutiny applies to Flores-Villar's gender-based claim and rational basis review applies to his age-based claim, we conclude that the residence

requirements of [the sections of U.S. code] survive."

The appeals court also cited a 1998 Supreme Court ruling that said the law furthers an important governmental interest in "assuring that a biological parent-child relationship exists." The appeals court said mothers and fathers "are not similarly situated in this respect; the relation is verifiable from the birth itself in the case of the mother, while a father's biological relationship to the child is not so easily established." 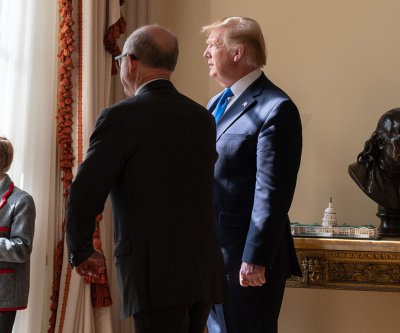 U.S. News // 2 hours ago
Watchdog: Diplomat Woody Johnson made improper remarks in London
Aug. 12 (UPI) -- A watchdog report on Wednesday concluded that President Donald Trump's ambassador to Britain has made inappropriate comments during his tenure in London on sensitive topics like race, religion and sex.

U.S. News // 4 hours ago
Stein Mart bankrupt, may close all U.S. stores
Aug. 12 (UPI) -- Discount retailer Stein Mart announced Wednesday it's filed for bankruptcy and plans to close most or all of its stores in the United States.

U.S. News // 5 hours ago
Billionaire media mogul Sumner Redstone dies at 97
Aug. 12 (UPI) -- Sumner Redstone, who turned a family-owned chain of drive-in movie theaters into a major U.S. media empire, has died at the age of 97, his company said Wednesday.

U.S. News // 7 hours ago
Poll: Confidence in medical system way up; at record low for police
Aug. 12 (UPI) -- Americans' confidence in the medical and public school systems have reached double-figure highs while confidence in law enforcement reached an all-time low, according to a new Gallup survey Wednesday.

U.S. News // 10 hours ago
New Zealand placed under lockdown amid new COVID-19 cluster
Aug. 12 (UPI) -- New Zealand on Wednesday reinstated lockdown measures as health officials rush to contain an outbreak of the deadly and infectious coronavirus in its largest city of Auckland.