WASHINGTON, June 7 (UPI) -- The Senate Foreign Relations Committee has postponed debate on a resolution on U.S. involvement in the military mission in Libya, led by NATO, a spokesman said.

The resolution, sponsored by committee Chairman John Kerry, D-Mass., and John McCain of Arizona, the top Republican on the committee, would generally express Senate approval of the U.S. role in Libya, Politico reported, citing senators familiar with the proposal. The committee had been scheduled to debate the resolution Thursday.

"Debate on the Libya resolution will be conducted as soon the next business meeting can be scheduled," committee spokesman Frederick Jones told Politico Tuesday.

The House last week passed a resolution that rebuked President Barack Obama for failing to get congressional approval as required in the War Powers Act for the U.S. military involvement in NATO-led airstrikes against military targets in Libya. However, the resolution wasn't sent to the Senate for consideration.

McCain said he spoke with Majority Leader Harry Reid, D-Nev., Monday about a vote on his resolution, adding that he believes the resolution will pass handily and should satisfy senators concerned that Obama hasn't complied with the War Powers Act, Roll Call reported Tuesday.

"I don't think the House activity is going to change anything that I know of," McCain said.

McCain's resolution would endorse a limited role for the U.S. military in Libya, where rebels have been battling forces loyal to strongman Moammar Gadhafi since February. It basically reflects Obama's current policy, given the United States has committed only to an arms embargo and airstrikes to enforce a no-fly zone, Roll Call said.

The NATO-led action was implemented to protect civilians targeted by Gadhafi because they supported his ouster.

Roll Call said it was unclear whether Senate opponents to U.S. military involvement would resemble the opposition in the House, where more than a third of Republicans supported a resolution sponsored by anti-war liberal Rep. Dennis Kucinich, D-Ohio, calling for the U.S. military to withdraw from Libya in 15 days.

Sens. Bob Corker, R-Tenn., and Jim Webb, D-Va., are working on a resolution that takes a more critical tone on U.S. policy than the Kerry-McCain resolution, Politico reported. Webb has been a leading Democratic critic of the Libyan operation. 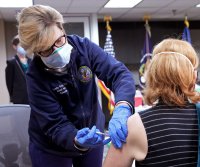 U.S. News // 2 hours ago
Group kills Texas gunman with bricks after 1 fatally shot at party, police say
July 26 (UPI) -- A crowd at a Fort Worth, Texas, party threw bricks at a suspected gunman, killing him Monday after he opened fire on attendees, killing one and injuring three others, police said.

U.S. News // 3 hours ago
Aon, Willis $30B merger canceled after Justice Department suit
July 26 (UPI) -- Aon and Willis Towers Watson on Monday called off a $30 billion deal that, had it gone through, would have resulted in the world's largest insurance broker.

U.S. News // 4 hours ago
Biden says 'long COVID' patients could qualify for having disability
July 26 (UPI) -- President Joe Biden said those who experience long-term health problems from COVID-19 could qualify as having a disability Monday during remarks marking the 31st anniversary of the Americans with Disabilities Act.
Advertisement