U.S.: No confirmation of Kashmiri death

WASHINGTON, June 6 (UPI) -- Pakistan claims Washington has confirmed the death of senior al-Qaida leader Ilyas Kashmiri but the State Department said there's been no such confirmation.

U.S. State Department spokesman Mark Toner told reporters he didn't "have any confirmation of that" when asked about Pakistani Prime Minister Syed Yousuf Raza Gilani's reported statement: "The U.S. has confirmed that Ilyas Kashmiri was killed on Friday."

When pressed about what the State Department had to say on the issue, Toner said: "I would just reiterate we have no confirmation."

Toner said he was aware of the news reports but added. "I both have no comment and no way of confirming his death."

There have been numerous reports in Pakistan that Kashmiri, described as a notorious terrorist and likely to take over the leadership of al-Qaida following the death of Osama bin Laden, was killed in a suspected U.S. drone strike Friday in South Waziristan, along with eight other militants.

The Harakat-ul-Jihad al-Islami group, or Huji, led by Kashmiri, later announced he had died.

If confirmed, Kashmiri's death would be the second major blow to al-Qaida in a month -- after bin Laden, the world's most wanted terrorist who was killed May 2 by a U.S. Navy SEAL team during a raid on his compound in Pakistan.

U.S. News // 35 minutes ago
Democrats introduce bill to raise debt ceiling, fund government
Sept. 21 (UPI) -- House Democrats on the Appropriations Committee introduced a bill Tuesday to keep the federal government running and suspend the debt ceiling past the 2022 midterms but Republicans are holding firm against it.

U.S. News // 1 hour ago
LA Lakers sign deal with food company Bibigo for new jersey patch
Sept. 21 (UPI) -- The NBA's Los Angeles Lakers are replacing the sponsorship patch on their uniforms in a deal worth a reported $100 million over five years.

U.S. News // 1 hour ago
Google to expand NYC campus with $2.1B Manhattan building
Sept. 21 (UPI) -- Tech giant Google announced on Tuesday that it will pay more than $2 billion to buy the New York City building where it presently leases ifs offices.

U.S. News // 4 hours ago
Johnson & Johnson says COVID-19 booster shot increases protection
Sept. 21 (UPI) -- Johnson & Johnson announced on Tuesday that its one-shot COVID-19 vaccine has performed well in real-world studies, offers long-lasting protection against the virus and boosts the immune system when given as a booster.

U.S. News // 16 hours ago
Summer snow creates wintry scenes around Yellowstone
Astronomical summer might not end for another day, but high-elevation areas in Montana, Idaho and Wyoming all saw their first snowfalls of the season this weekend, with more snow showers in the forecast. 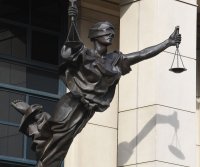