SALT LAKE CITY, May 29 (UPI) -- The widow of a Utah doctor who killed himself after they were arrested for artifacts trafficking has filed a wrongful death suit against the U.S. government.

"His final words connected his death to the defendants' egregious actions," the lawsuit says.

The Redds and their daughter Jericca were among 24 people arrested in a two-year sting operation targeting the illegal trafficking of American Indian artifacts in the Four Corners area.

James Redd killed himself June 11, 2009, one day after being charged with the illegal possession of a "bird effigy pendant" worth $1,000. Jeanne and Jericca Redd pleaded guilty to felony charges and received probation.

"Little did he know, federal agents inebriated with power and acting with no remorse, would use this shell to attempt to justify the arrest of Dr. Redd -- for a felony -- ultimately shattering the sanctity of his life," the lawsuit states, accusing more than a dozen FBI and BLM agents of "constitutional violations, including unlawful detainment and unreasonable search and seizure," the Tribune said.

"The defendants were aware of the physical and psychological impact of their assault on Dr. Redd, knowing that his life focused on his family, his religion, his profession, and his community," the lawsuit says. "They intended to use his goals to try to get him to admit to a crime he did not commit using his own fears as their weapon of choice, knowing that their weapon was deadly." 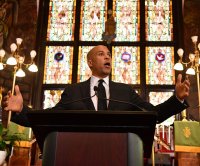 U.S. News // 6 hours ago
Houston plane crash leaves no major injuries, 2 minor
Oct. 19 (UPI) -- A Boston-bound plane crashed while taking off Tuesday morning from Houston Executive Airport, but all aboard escaped with no major injuries.
Advertisement