Witness says he was 'pleased' by Mumbai

CHICAGO, May 24 (UPI) -- An admitted terrorist spent his second day of testimony in Chicago Tuesday describing the planning for the November 2008 terror attack in Mumbai.

David Coleman Headley described waiting in a hotel room in Lahore, Pakistan, for news of the attack, the Chicago Tribune reported. He said he got a text message telling him to turn on the television.

"I was pleased," he answered when assistant U.S. Attorney Daniel Collins asked him how he felt about what he saw.

Headley testified about the role played by the defendant in the trial, Dr. Tahawwur Rana. He said Rana, now a businessman in Chicago, helped him with cover for his time in Mumbai surveying potential targets by setting up an office in the city and helping him gt a visa.

A group of terrorists invaded Mumbai Nov. 26, 2008, attacking targets that included luxury hotels, restaurants, a hospital and a Jewish center. By the time all the attackers except one had been killed, they had taken 164 lives.

Headley, the son of a Pakistani who worked for Voice of America and a U.S. mother, has pleaded guilty to carrying out surveillance for the attacks and for an abortive attack on a Danish newspaper for the Pakistani group Lashkar-e-Taiba.

Headley said Monday officers in the ISI, the Pakistani intelligence agency, were involved in planning the Mumbai attacks. 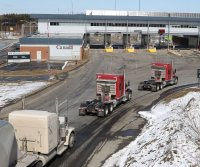