Their tasks, all completed, included refilling a cooling loop with ammonia and lubricating a joint on a solar power device that tracks the sun.

The astronauts also installed a camera cover on Dextre (the Special Purpose Dexterous Manipulator), one of the station's robotic arms, and lubricated one of the robot's hands.

U.S. News // 1 hour ago
Pickup truck drives into Pride parade in Florida; one dead, one hurt
June 20 (UPI) -- A pickup truck plowed into the start of the Stonewall Pride Parade near Fort Lauderdale on Saturday night, killing one man and injuring another apparently by accident, officials said.

U.S. News // 2 hours ago
Claudette to swipe U.S. Atlantic Coast, Canada after drenching Gulf
June 20 (UPI) -- The third tropical storm of the season formed along the Louisiana coast early Saturday, but it could go on to impact much of the eastern U.S. and even Canada before dissipating. 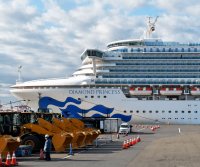