MECKLENBERG, N.C., May 17 (UPI) -- A California man was arrested in North Carolina for allegedly running a prostitution ring in several cities around the country, court documents indicated.

Craig Allen Rodgers was arrested Friday and was being held in a Mecklenberg, N.C., jail after an anonymous tipster called a human-trafficking hot line about a female acquaintance, identified only as J.M., who wanted out of her life as a prostitute allegedly working for Rodgers, the Charlotte (N,C.) Observer reported Tuesday.

A federal complaint was filed by the Mecklenberg U.S. Attorney's Office alleging Rodgers became violent with J.M. -- pulling her hair and striking her in the face -- after she allegedly told him she wanted to leave the business.

"He employed physical violence and threats to coerce her to continue providing commercial sex acts," the complaint reads.

Rodgers, who has previous prostitution-related convictions, is accused of procuring customers via the Internet and traveling with his prostitutes to meet clients in hotel rooms in Charlotte, Covington, Ohio, Albuquerque, N.M. and Nashville, Tenn., the complaint said.

U.S. News // 39 minutes ago
U.S. warns of heightened businesses risks in Myanmar
Jan. 26 (UPI) -- Ahead of the one-year anniversary of the military seizing control of Myanmar in a coup, the Biden administration is warning Americans about the heightened-risk of doing in business in Asian nation.

U.S. News // 5 hours ago
Supreme Court denies stay day before Oklahoma execution
Jan. 26 (UPI) -- The U.S. Supreme Court on Wednesday denied a stay of execution for an Oklahoma death row prisoner scheduled to be executed less than a day later. 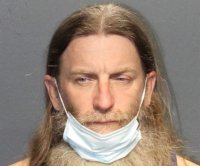