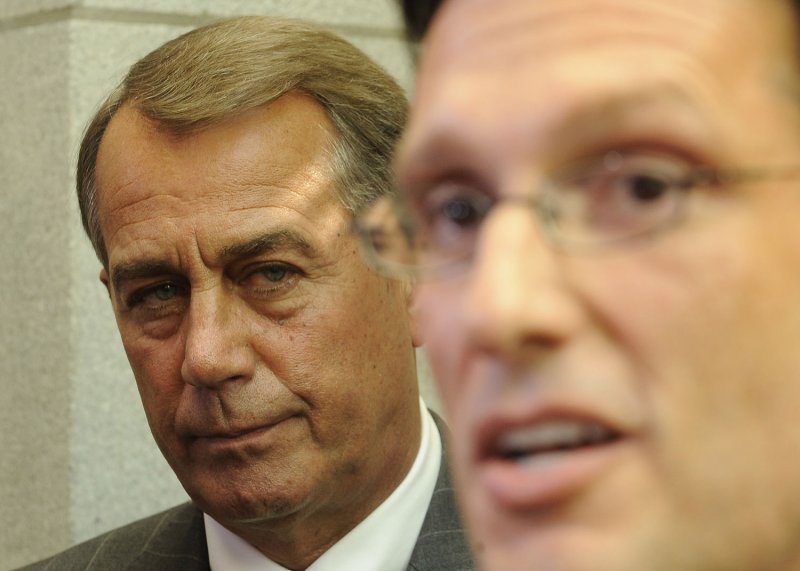 Speaker of the John Boehner, R-OH, looks on as House Majority Leader Eric Cantor, R-VA, discusses a Republican Member meeting over the budget impasse in the U.S. Capitol in Washington on April 6, 2011. A showdown over cutting spending in the 2011 budget may lead to a government shutdown if Congress doesn't act by April 8. UPI/Roger L. Wollenberg | License Photo

WASHINGTON, May 3 (UPI) -- A top Republican said Tuesday he's considering a test vote in the U.S. House on the debt ceiling to show Democrats it can't be raised without additional cuts.

Majority Leader Eric Cantor, R-Va., told reporters "if it is necessary for us to tell the president that [a clean vote] is dead on arrival in the House, I believe we can do that," Politico reported. Cantor's comments were a blow to Senate Majority Leader Harry Reid, D-Nev., who has called for a "clean" or stand-alone vote to raise the debt ceiling.

Cantor said majority Republicans in the House "will not support an increase in the nation's credit limit without serious, real changes to the way this town does business and the way we spend taxpayer dollars." He spoke after emerging from a closed House Republican Conference meeting in the basement of the Capitol, the newspaper said.

In contrast, House Minority Leader Steny Hoyer, D-Md., said voting against a stand-alone measure would be "holding hostage the credit of the United States," Poliltico reported.

The newspaper said the clean debt ceiling vote is seen as going nowhere on Capitol Hill.

The U.S. government's debt will slam into a self-imposed wall by May 16 unless Congress acts, Treasury Secretary Timothy Geithner said Monday.

Congress has set the country's debt ceiling -- the limit it can borrow -- at $14.294 trillion. But Geithner said in a letter to Congress the debt had reached $14.218 trillion March 31, CNNMoney reported.

Geithner said he expected the ceiling to be reached "no later than May 16," a date based on projections he said would be unlikely to change significantly.

In the meantime, Geithner said the Treasury could buy some time -- about eight weeks -- with some fiscal maneuvers that would extend the deadline to "about July 8."

U.S. News // 45 minutes ago
Shipment of 78,000 pounds of baby formula from Germany arrives in U.S.
May 22 (UPI) -- A shipment of infant formula arrived in Indianapolis on Sunday as the Biden administration works to address a nationwide shortage.

U.S. News // 3 hours ago
Intense heat scorches much of the East Coast, with more still to come
A major spell of heat has arrived on the East Coast, bringing the season's highest temperatures for many and even setting daily records for some.

U.S. News // 17 hours ago
Wisconsin Republicans vote not to endorse in gubernatorial primary
May 21 (UPI) -- The Republican Party of Wisconsin voted at its annual convention to refuse to endorse any of the party's four candidates for governor, a first in the party's history.