Loughner, 22, who is charged with 49 federal counts for the Jan. 8 rampage that killed six people and wounded 13, including U.S. Rep. Gabrielle Giffords, D-Ariz., was sent in March to a prison hospital in Missouri for evaluation.

Defense attorney Judy Clarke sought to have him returned to Tucson and objected to U.S. District Judge Larry Burns' order to have the evaluations videotaped and made available to both sides, The Arizona Republic reported.

On Friday, Burns agreed to have a court-appointed psychiatrist travel from San Diego to Missouri to do second evaluation since the defense questioned "the impartiality of Bureau of Prisons staff." The videotapes will be turned over to the court.

Burns also let Loughner's defense arrange its own competency evaluation so long as it takes place before his competency hearing set for May 25 in Tucson.

U.S. News // 22 minutes ago
Port of Houston targeted in cyberattack
Sept. 23 (UPI) -- The Port of Houston, one of the largest in the United States, announced Thursday that it was the target of a cyberattack last month. 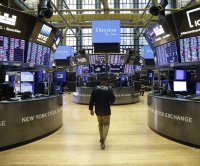 U.S. News // 6 hours ago
U.S. markets rise to green for the week; household net worth hits new record
Sept. 23 (UPI) -- The Dow Jones Industrial Average gained more than 500 points on Thursday as all three major indexes rose into positive territory for the week.