Budget meetings to run all night 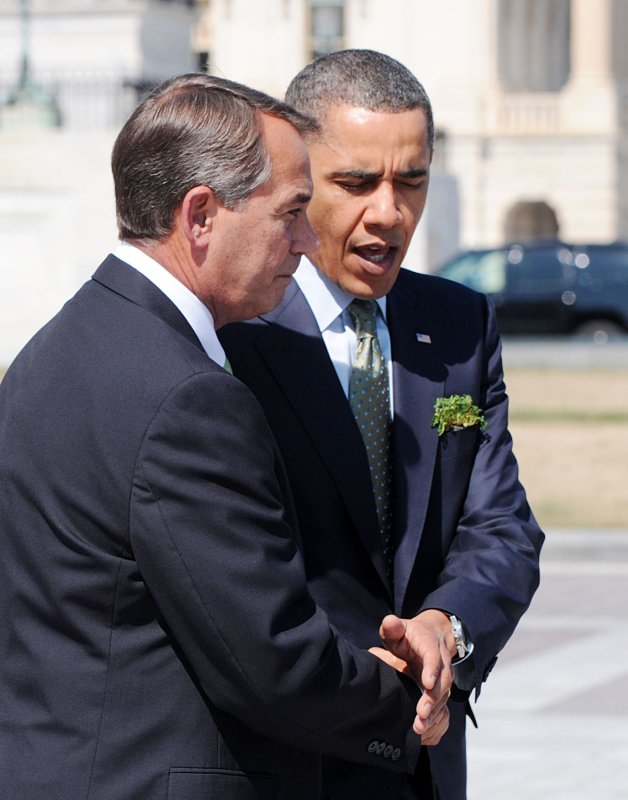 WASHINGTON, April 6 (UPI) -- President Barack Obama said congressional negotiators would work during the night to try to agree on a budget bill and avert a U.S. government shutdown.

Following a meeting with Vice President Joe Biden, House Speaker John Boehner, R-Ohio, and Senator Majority Leader Harry Reid, D-Nev., the president told reporters at the White House the meeting "narrowed and clarified issues that are still outstanding" but that no agreement had been reached on a bill to fund the federal government beyond Friday, when current funding authorization expires.

"People have to realize that a government shutdown has real consequences for real people," he said, noting that hundreds of thousands of Americans would find themselves "suddenly without a paycheck."

"At a time when the economy is still coming out an extraordinarily deep recession it would be inexcusable, given the relatively narrow differences … that we can't get this done," Obama said.

Boehner, appearing with Reid outside the White House, said "honest differences" remain "but we've made some progress."

"There is an intent on both sides to continue to work together to try to resolve this," Boehner said. "No one wants the government to shut down."

Reid said negotiators had "narrowed the differences significantly" but "we're not there yet."

The meeting came after Obama returned from speaking at the National Action Networks Annual Gala in New York.

A shutdown of the U.S. government would significantly cut back services and mean the layoff about 800,000 workers, the Obama administration warned Wednesday.

If no deal is reached when the current stopgap measure expires Friday, some of the immediate effects include closures of national parks and zoos and the delay of 2010 tax returns, The Washington Post reported.

Congressional employees from both sides of the aisle conducted last-ditch negotiations Wednesday, but there were no signs of budging from the amount of cuts acceptable -- about $60 billion for Republicans and about $30 billion for Democrats.

After meeting with fellow Republicans, Boehner said the GOP would move forward with its "troop funding bill" that would keep government open for another week, fund the military until the end of the fiscal year and cut $12 billion in spending.

"We think it's the responsible thing to do," Boehner said.

Boehner said he liked Obama personally "but the president isn't leading" the country out of its debt and deficit crisis.

"So here we are, trying to clean up last year's mess," when no budget was passed, Boehner said.

The Republicans' goal is simple, Boehner said, "Fight for largest spending cuts we can get and policy riders attached."

He said House leaders were "continuing to have conversations with our colleagues in the Senate."

Obama, leading a clean energy town hall discussion near Philadelphia, said there has been agreement on the need to compromise "but somehow we still don't have a deal … because some folks are trying to inject politics in what should be a simple debate on how we [can] pay our bills."

On the Senate floor Wednesday, Reid said Democrats want to avoid a shutdown and implement a "smart budget" that includes cuts while preserving jobs. But when Democrats agreed to "meet in the middle" Republicans "moved where the middle is," he said.

Republicans, Reid said, must remember that "reality is more important than ideology."

In his remarks, Senate Minority Leader Mitch McConnell of Kentucky said his party has provided a budgetary road map for the remainder of the fiscal year, but Democrats have offered "no alternative" and are "sitting on the sidelines … taking potshots … while rooting, rooting for a shutdown."

Sen. Barbara Mikulski, D-Md., chided both parties during remarks on the Senate floor, urging them to "act like rational human beings."

White House press secretary Jay Carney said Obama has "laid out his priorities and the choices that he thinks face us now as we are in these final stages of negotiations."

Obama and Boehner had a brief telephone call Wednesday, with Boehner telling the president he was "hopeful" a spending deal could be reached, The Hill reported. The call, initiated by Obama, lasted about 3 minutes, Boehner's office said.