Wong's security breaches, including stealing another passenger's boarding pass at New York's Kennedy International Airport, are being investigated by the Joint Terrorism Task Force and could lead to new federal charges against him, the New York Post said.

The force, charged with taking action against terrorism, investigates terrorism-related crimes including identity theft. It includes the FBI, the U.S. Transportation Security Administration, U.S. Immigration and Customs Enforcement and U.S. Customs and Border Protection among other federal agencies.

"This guy has exposed serious flaws in passenger security in at least two cities," an official told the Post.

The plane was taxiing to the runway when flight attendants noticed Wong had no seat and all the rows were filled with passengers, Port Authority Police Det. Shawn Russell said.

When the plane returned to the gate, Wong admitted he stole another passenger's boarding pass from the Delta ticket counter to get through Terminal 2, then bypassed the TSA checkpoint in international Terminal 4 by sliding behind a removable partition, the detective said.

Earlier in the day, Wong also tried to board a Virgin America flight and another Delta flight without a ticket, the New York Daily News reported. 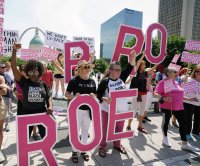 U.S. News // 20 minutes ago
Approval for Supreme Court tumbled after leaked opinion on abortion, poll shows
May 25 (UPI) -- The share of Americans who approve of the job the U.S. Supreme Court is doing slid 10 points in the weeks after a leaked draft opinion signaled that the court's conservative majority intends to overturn Roe vs. Wade.

U.S. News // 8 hours ago
FDA chief says agency, baby-formula producer Abbott share in blame for U.S. shortage
May 25 (UPI) -- Federal regulators and executives from the baby formula industry appeared before lawmakers Wednesday to explain what's behind the present shortage of infant formula in the U.S. and shed light on some possible answers.

U.S. News // 5 hours ago
Police trying to piece together Texas school shooting as nation mourns 19 children, 2 educators
May 25 (UPI) -- Authorities in south-central Texas will give an update Wednesday on the elementary school attack that killed nearly 20 children and two educators and became the deadliest school shooting in the United States in a decade.

U.S. News // 3 hours ago
Trump, Texas' Abbott set to speak at NRA convention after deadly school shooting
May 25 (UPI) -- Texas Gov. Greg Abbott, who announced that 19 children were killed in a shooting attack at their school on Tuesday, is scheduled to speak at the NRA's annual convention this week just a few hours away in Houston.