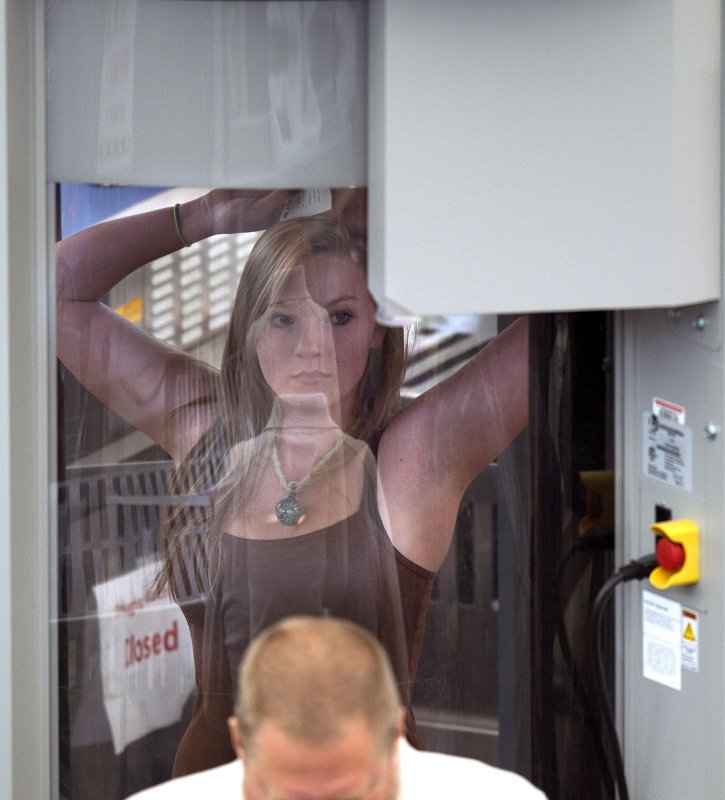 A departing passenger undergoes a full-body scan conducted by Transportation Security Administration (TSA) agents at Denver International Airport (DIA) the day before the Thanksgiving holiday on November 24, 2010 in Denver. DIA officials expect a record number of passengers to pass through the airport. A passenger boycott of the full body scanners did not appear to materialize at DIA. UPI/Gary C. Caskey | License Photo

However, the TSA said there is no danger to those screened at airports by the devices, CNN reported Saturday.

"The amount of radiation is approximately (the same as received) as two minutes in the air," Napolitano said.

The TSA said it ordered the retesting because of "record-keeping errors."

"We're taking a number of steps to ensure the mistakes aren't repeated and the public will be able to see for themselves by reviewing all future reports online," said TSA spokesman Nicholas Kimball.

He said while the scanners are safe, "these record-keeping errors are not acceptable."

U.S. News // 1 hour ago
House Oversight Committee invites gun company CEOs to testify
July 7 (UPI) -- In the wake of a spate of shootings over the July 4 holiday, the House Committee on Oversight and Reform invited the CEOs of major gun manufacturers to testify, the committee's chair confirmed Thursday.

U.S. News // 2 hours ago
American Airlines to pay pilots triple to fill open routes
July 7 (UPI) -- An automated scheduling snafu at American Airlines that left thousands of flights without pilots led the carrier to offer triple pay to get the routes filled.

U.S. News // 3 hours ago
FAA gives $1 billion to make upgrades, repairs at 85 U.S. airports
July 7 (UPI) -- About $1 billion from the bipartisan infrastructure law that was passed last fall will go to dozens of airports across the United States to make upgrades and repairs, the federal government said on Thursday.

U.S. News // 11 hours ago
Detroit police officer, gunman killed in shooting
July 7 (UPI) -- A Detroit police officer and a suspect were killed in a gunfight that erupted in the city's west side as law enforcement were responding to reports of a gunman indiscriminately firing an assault rifle, authorities said.
Advertisement