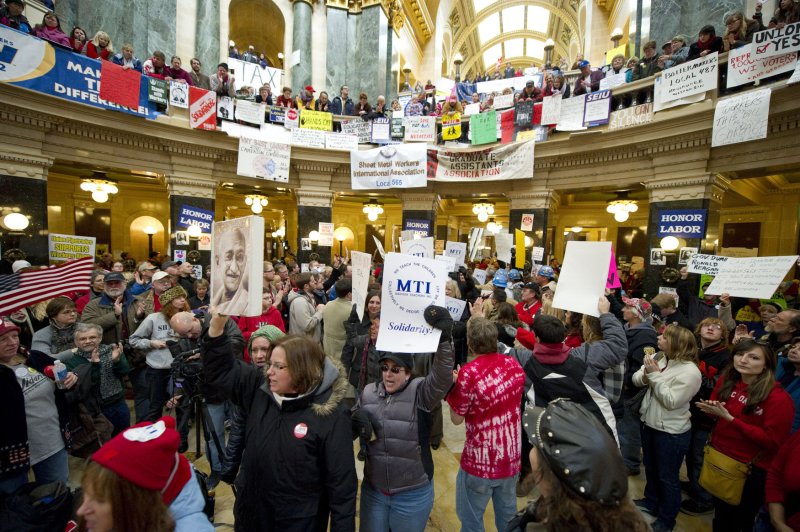 The two-year, $59.2 billion budget proposal provides for increased state spending on private schools and elimination of 1,200 state jobs, and could lead to layoffs of state workers, the Milwaukee Journal Sentinel reported.

"This is a reform budget," Walker said in prepared remarks. "It is about getting Wisconsin working again -- and to make that happen, we need a balanced budget that works -- and an environment where the private sector can create 250,000 jobs over the next four years."

Public employee union leaders said they would accept wage and other concessions but only if the governor abandons his insistence on stripping state workers of collective bargaining rights.

Robert Kraig, executive director of Citizen Action of Wisconsin, said in a statement Walker was cutting corporate taxes at the expense of the neediest Wisconsinites.

"The facts are clear, Scott Walker's decision to place the entire burden of Wisconsin's budget shortfall on our children, our most vulnerable citizens in need of healthcare and long term care, and our dedicated public employees is his own value choice, not an economic necessity forced on him by others," Kraig said.

A judge Tuesday ordered state officials to give the public more access to the Wisconsin Capitol, where entrance had been restricted. A memo by Sergeant-at-Arms Anne Tonnon Byer had limited public access to one door while politicians battled over state jobs, the Wisconsin State Journal reported.

The state Department of Administration at first said the order had not been served, but later acknowledged receiving the order. However, an agency spokesman said its existing politics comply with the order, the newspaper said.

The Journal Sentinel said the judge's order would stand until a hearing could be held.

Meanwhile, Democratic state senators say they wouldn't return to the Capitol Tuesday but Gov. Scott Walker said that could cost $165 million and 1,500 jobs.

The $165 million involves state bonds whose debt is due March 15. Walker wants to put off the debt -- and the restructuring he proposes would increase debt payments over two years by almost $30 million in principal and interest, the Democrats said.

The 14 Democrats who fled the state two weeks ago said taxpayers would not lose $165 million but it would have to pay an additional $30 million. Democratic state Sen. Jon Erpenbach told the Journal Sentinel Walker was "just kicking the can down the road."

The Democrats offered a compromise plan they said would avoid layoffs.

Walker said Monday he would delay sending out layoff notices "as long as possible" but would probably have to start the process of laying off 1,500 employees this week. He said the layoffs could ultimately spread to 12,000 state, local and school employees.

"So long as the governor and Senate Republicans remain unwilling to compromise on this, I think everybody's unwilling to come back," Sen. Jim Holperin, D-Conover, told the Journal Sentinel.

The Wisconsin Senate cannot vote on the budget without the 14 Democrats because it lacks a quorum.

U.S. News // 6 hours ago
Protesters gather across U.S. in wake of Tyre Nichols beating video
Jan. 28 (UPI) -- Protesters took to the streets in cities across the country on Friday following the release of video of the beating of Tyre Nichols by Memphis police officers on Jan. 7. Nichols died three days later.

U.S. News // 8 hours ago
2 Memphis-area deputies under investigation after release of Nichols footage
Jan. 28 (UPI) -- Two Tennessee sheriff's deputies who were at the scene of the fatal police beating of Tyre Nichols in Memphis are under investigation in connection with the incident, officials said.

U.S. News // 1 day ago
San Francisco court releases Paul Pelosi attack video
Jan. 27 (UPI) -- The police video of the Oct. 28 hammer attack on Paul Pelosi was released Friday by a San Francisco court. It shows the assailant and Pelosi both grasping a hammer held by the attacker, who then suddenly strikes Pelosi.