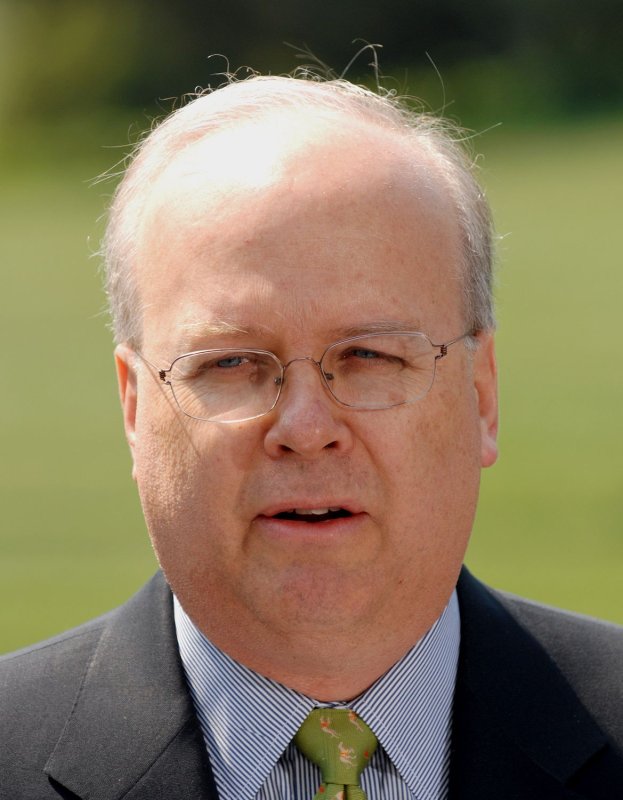 White House Deputy Chief of Staff Karl Rove speaks after U.S. President George W. Bush announced Rove will leave his post at the end of August on the South Lawn of the White House on August 13, 2007. Rove is widely credited with being the architect of Bush's Presidential election victories. (UPI Photo/Roger L. Wollenberg) | License Photo

Rove, speaking Wednesday on Fox News, went so far as to suggest the Obama camp is trying to keep the "birther" issue going as a distraction.

"We need the leaders of our party to say, 'Look, stop falling into the trap of the White House and focus on the real issues,'" he said.

Palin, speaking in New York, called claims Obama was born in Kenya or is a secret Muslim "distractions" and "annoying." The former Alaska governor said Thursday Republicans need to focus on the economy.

A poll of 400 likely Republican primary voters showed 51 percent believe Obama was not born in the United States. Rep. Jeff Flake, R-Ariz., told CNN he is not convinced the poll is an accurate reflection of Republican beliefs, saying most people "accept the reality" that Obama was born in Hawaii.

At least two high-profile Republicans refused to back away from the so-called birthers. Rep. Michele Bachmann of Minnesota and House Speaker John Boehner of Ohio said they accept Obama's birth certificate but would not say those who believe otherwise are wrong.

"Well, that's not for me to state, that's for the president to state," Bachmann said when asked on ABC her if Obama is a U.S.-born Christian.

U.S. News // 5 hours ago
Idaho tech company suing FTC over privacy data use
Aug. 18 (UPI) -- An Idaho data marketing and analytics company is suing the U.S. Federal Trade Commission, alleging the agency threatened it with a lawsuit over its consumer-tracking capability, according to court documents.

U.S. News // 10 hours ago
Justice Dept. ordered to redact Mar-a-Lago search affidavit for possible unsealing
Aug. 18 (UPI) -- A federal judge in Florida ordered the Justice Department on Thursday to redact portions of the affidavit used to get the search warrant for Mar-a-Lago, presuming that some of it can unsealed.

U.S. News // 8 hours ago
N.Y. grand jury indicts Hadi Matar for knife attack on author Salman Rushdie
Aug. 18 (UPI) -- The man accused of attacking Salman Rushdie with a knife at an event in New York last week has been indicted by a grand jury and will face criminal charges in court on Thursday.

U.S. News // 9 hours ago
Trump Org. CFO Allen Weisselberg pleads guilty to charges of tax evasion, larceny, conspiracy
Aug. 18 (UPI) -- A top executive at the Trump Organization pleaded guilty on Thursday to more than a dozen charges that included tax evasion in a deal that will make him a witness against the company at trial this fall.

U.S. News // 9 hours ago
E. coli outbreak sickens dozens in Michigan, Ohio
U.S. health officials are investigating an outbreak of E. coli that has infected 29 people in Michigan and Ohio.