The archdiocese launched the Internet database, which includes thousands of baptisms and weddings at St. Louis Cathedral between 1777 and 1801, the (New Orleans) Times-Picayune reported. Archivist Emilie Leumas said the archdiocese hopes to put all its colonial-era records from 1718 to 1812, when Louisiana became part of the United States, on line by next year.

Aymond said Tuesday was selected for release of the first records because it is the beginning of Black History Month. He said he wanted to recognize the role played by slaves and free blacks in the history of the church and the church's own record as a slave owner.

Aymond pointed out that the records for slaves do not use family names, stripping them of some of their humanity -- and also making 21st-century genealogical searches more difficult.

"I apologize in the name of the church because we allowed some of these things to continue. This is sinful. Racism is sinful," he said.

U.S. News // 53 minutes ago
Dr. Mehmet Oz announces bid for Pennsylvania Senate seat
Nov. 30 (UPI) -- Dr. Mehmet Oz, who rose to fame on "The Oprah Winfrey Show," announced a bid to run for the U.S. Senate in Pennsylvania as a Republican on Tuesday. 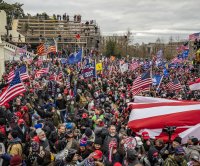