COLUMBUS, Ohio, Jan. 26 (UPI) -- The homeless Ohio man whose "golden voice" video became an Internet sensation says he's left a Texas rehab facility because he was unhappy with his treatment.

Williams, 53, had spent less than two weeks there after a three-episode appearance on the syndicated talk show "Dr. Phil."

A family friend said Williams plans to pursue similar help through an outpatient center at some point.

"He wants recovery," said the friend, who asked to remain anonymous. "That's the only thing that's going to help him."

The friend said Williams was disturbed by the sight of cameras when he arrived at the center, a medication regimen so heavy that "when he wasn't in (therapy) class, he was asleep" and requests to give on-air interviews with show host Phil McGraw.

"Where's the confidentiality?" the friend said. "They exploited him."

"The decision to remain in treatment is Ted's to make," McGraw said in a statement Monday. "We certainly hope that he continues his commitment to sobriety, and we will continue to help and support him in any way that we can. We wish him well."

U.S. News // 4 hours ago
Social media influencer charged with scheme to suppress 2016 U.S. election
Jan. 28 (UPI) -- Federal prosecutors have charged a far-right social media influencer of conspiring with others to spread disinformation online during the 2016 presidential election with the intention to prevent people from voting.

U.S. News // 6 hours ago
Man charged with murder, assault in Portland hit-and-run rampage
Jan. 28 (UPI) -- A district attorney in Oregon has charged a 64-year-old man with murder, accusing him of driving his car into several people, including a grandmother who died in the vehicular attack.

U.S. News // 8 hours ago
Union: 'Unconscionable' that Capitol Police failed to disclose Jan. 6 threat
Jan. 27 (UPI) -- Capitol Police Labor Committee Chair Gus Papathanasiou said Wednesday it was "unconscionable" that leadership was aware of the threat of the Jan. 6 riot at the Capitol and failed to properly inform officers.

U.S. News // 10 hours ago
VA nominee McDonough: Guiding veterans through pandemic will be top priority
Jan. 27 (UPI) -- Denis McDonough, President Joe Biden's nominee to head the Department of Veterans Affairs, said if confirmed he will make "getting our veterans through this pandemic" a top priority.

U.S. News // 14 hours ago
U.S. markets fall amid negative Fed outlook, GameStop speculation
Jan. 27 (UPI) -- The Dow Jones Industrial Average had its worst day since October and the S&P 500 erased its gains for the year amid pessimism from the Federal Reserve and concern over speculative trading of GameStop and AMC stock. 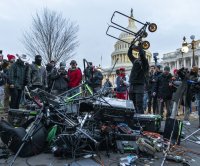 U.S. News // 14 hours ago
Homeland security warns of domestic extremism threat
Jan. 27 (UPI) -- The Department of Homeland Security issued a national terrorism advisory bulletin Wednesday warning of a heightened threat throughout the United States inspired by an attack at the U.S. Capitol three weeks ago.