Among other things, the Republican Study Committee's proposal would extend President Obama's pay freeze on federal employees from two years to five and would cut civil service workforce by 15 percent through attrition in a decade, among other things, The Washington Post reported Friday.

The latest proposals, revealed Thursday, face an uphill battle because they would need approval in the Democratic-controlled Senate and be signed into law by Obama -- and it's not clear whether they're backed by House Speaker John Boehner, who has set a less bold plan for reducing the federal budget.

Members of the Study Committee said they will push debate over whether reducing the country's public sector is the best way to grow the private sector, the Post said.

"I've got to believe that even public workers understand the looming crisis," said Rep. Joe Walsh, R-Ill., who was elected in November. "Private companies do this all the time. The public sector will have to go down the same road everybody needs to go down."

Democrats and public employee unions said the proposals would lead to a huge reduction in services and their quality.

"Even if drastic reductions such as these are ultimately not enacted into law, proposals like these get in the way of vital agency recruitment and retention efforts," Colleen M. Kelley, president of the National Treasury Employees Union, said in a statement. 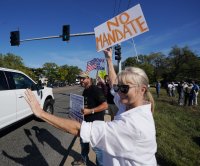