Online gambling not a good bet

Senate Majority Leader Harry Reid fell short last month in his effort to allow U.S. casino companies set up Internet poker sites and access a portion of the multibillion dollar offshore industry. The chances of success are diminished now that Republicans control the House and have more members in the Senate.

Reid says he's ready to try again this year but his efforts may be thwarted by Rep. Spencer Bachus, R-Ala., named chairman of the House Financial Services Committee, and other GOP lawmakers who indicated they want to keep online betting illegal in the United States, The Washington Times reported Tuesday.

"This is a huge priority for Spencer," a House Republican aide said.

If Bachus takes up Internet gambling, he likely will examine the effectiveness of existing laws and making them tougher, the staffer said.

"If 2010 is any sign of what's to come in the future for online poker, the only thing that is really for certain is that the road is a long, bumpy one and the legalization of online poker will be very difficult to come by," PokerNews.com said.

U.S. News // 57 minutes ago
CEO of Texas power grid operator terminated in aftermath of storm
March 4 (UPI) -- The board overseeing the Electric Reliability Council of Texas, the independent nonprofit entity that operates and manages the electricity grid that covers much of Texas, fired ERCOT CEO Bill Magness.

U.S. News // 2 hours ago
Damages from February winter storms could be as high as $155 billion
Power outages, insurance claims and millions of impacted residents are adding up to make the coast-to-coast winter weather last month even more costly than the historic 2020 hurricane season. 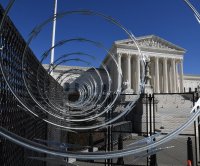 U.S. News // 10 hours ago
Capitol Police warn of 'possible plot' to breach Capitol on Thursday
March 3 (UPI) -- U.S. Capitol Police on Wednesday warned of a possible security threat to the Capitol planned for the following day, forcing the House of Representatives to scrap its Thursday session.