The 160 deaths of federal, state and local law enforcement personnel was a dramatic increase over the 117 officials who died last year, a 50-year low, the National Law Enforcement Officers Memorial Fund said in a release.

Fifty-nine officers were fatally shot during the past year, a 20 percent increase from the 49 killed by gunfire in 2009, the fund said Monday.

"A more brazen, cold-blooded criminal element is on the prowl in America, and they don't think twice about killing a cop," fund Chairman Craig W. Floyd said.

Traffic-related incidents remained the top cause of death among our nation's law enforcement officers for the 13th straight year, the fund said, with 73 officers killed in traffic-related incidents this year, compared to 51 in 2009. Of the 73 deaths, 50 occurred during automobile crashes, 16 officers were struck and killed while outside of their own vehicles, six died in motorcycle crashes and one bike patrol officer was struck by a vehicle.

Texas led in the number of officer deaths with 18, followed by California with 11, Illinois with 10, Florida with nine and Georgia with seven, the fund said.

The two law enforcement agencies reporting the most deaths in 2010 were the California Highway Patrol and the Chicago Police Department, each with five.

Eleven of the officers killed served with federal law enforcement agencies. Six female officers died in 2010, compared to one in 2009. 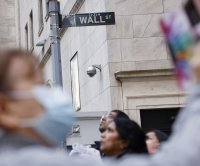 U.S. News // 17 minutes ago
Experts advocate better red flag laws as 2022 sees 202 mass shootings
May 16 (UPI) -- There have been 202 mass shootings in the U.S. through the 5 1/2 months of this year, including Saturday's racially motivated attack at a Buffalo, N.Y., supermarket that killed 10. Experts say red-flag laws can help.

U.S. News // 26 minutes ago
Uber rolls out new products: EV's, party buses, delivery robots
May 16 (UPI) -- Uber unveiled new features at its "Go/Get 2022" event Monday allowing passengers to use their Uber app to book party buses and electric vehicles or to order food at Stadiums or from autonomous sidewalk robots.

U.S. News // 2 hours ago
California church shooting suspect ID'ed as 68-year-old Las Vegas man
May 16 (UPI) -- A suspect arrested in connection with a mass shooting at an Orange County, Calif., church Sunday has been identified as a 68-year-old man from Las Vegas. 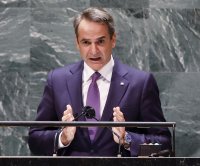 U.S. News // 2 hours ago
Biden hosts Greek prime minister to discuss Russia, Turkey
May 16 (UPI) -- Russia's invasion of Ukraine and a dispute with Turkey will highlight a visit by Greek Prime Minister Kyriakos Mitsotakis to the White House on Monday.

U.S. News // 3 hours ago
President Joe Biden awards Public Safety Officer Medals of Valor
May 16 (UPI) -- President Biden awarded Medals of Valor to 15 public safety officers in a White House ceremony Monday. The officers, including two who died in the line of duty, were honored for individual acts of bravery.