NEW YORK, Dec. 8 (UPI) -- A Los Angeles man and his cousin said they're filing a civil lawsuit in federal court in Washington accusing an elderly German man of killing their ancestors.

Gould told the Times he can provide documentary proof that Frank played a central role in the administration of the earliest days of the Holocaust while serving as a desk officer.

Frank, who published a book about his Nazi career, is not in hiding and is not regarded as a war criminal by German authorities.

During World War II he served in a senior position on the administrative staff of Heinrich Himmler, the second most powerful man in Nazi Germany.

However, they said his signature only confirmed that the document's language conformed with Nazi ideology.

U.S. News // 5 hours ago
Midwestern cities ready for waves of warm air
The Midwest is about to experience some relief as it slips into an increasingly moderate weather pattern. 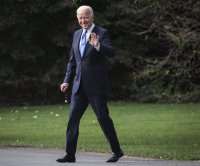