A U.S. Marine stands guard near shopkeepers as they patrol the Safaar Bazar in the Gharmsir District of Helmand province after IEDs where reported in the area in Afghanistan on August 19, 2010. The leaked cables indicated that U.S. officials and Afghan President Hamid Karzai believed British forces were not up to securing Helmand province by themselves, with Karzai reportedly saying he was glad when the U.S. Marines were sent to the province.UPI/Hossein Fatemi. | License Photo

One one Cabinet official "about whom no allegations of bribery exists" was found, a cable said.

The existence of corruption in Afghanistan isn't new. The United States has made cleaning up the Afghan government a condition for continued aid, and Transparency International, an advocacy organization that tracks worldwide government corruption, ranks Afghanistan as the world's third most corrupt country, after Somalia and Myanmar.

But analysts told the Times the cache of cables obtained by WikiLeaks provides a new look at the breadth and depth of the graft and the challenges it poses to U.S. officials trying to build support for the Afghan government as part of its counterinsurgency strategy in the country.

The latest documents released also contain criticism raised by U.S. diplomats about the British military effort in Afghanistan from 2007 to 2009, the BBC reported.

The cables, published in The Guardian, indicate U.S. officials and Afghan President Hamid Karzai believed British forces were not up to securing Helmand province by themselves, with Karzai reportedly saying he was glad when the U.S. Marines were sent to the province.

A cable sent in 2008 from the U.S. Embassy said, "(We) and President Karzai agree that British forces are not up to the task of securing Helmand" without U.S. support. 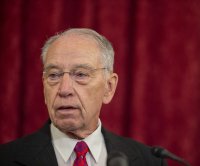 U.S. News // 3 hours ago
U.S. mayors pressed to address cybersecurity precautions
WASHINGTON, Jan. 20 (UPI) -- Cities can't prevent cyberattacks, but they can take steps to mitigate and recover from breaches, the director of the Cybersecurity and Infrastructure Security Agency told the U.S. Conference of Mayors on Thursday.
Advertisement