Gray to be sixth D.C. mayor

The Washington Post reported Gray had received about 18,000 votes, or 78 percent of those cast, to about 4,570 write-in votes.

It wasn't known how many of the write-in votes went to incumbent Adrian Fenty, who lost to Gray in the Democratic primary in September. Some supporters started the write-in effort on Fenty's behalf, the Examiner said.

U.S. News // 29 minutes ago
Judge says Capitol rioters not 'political prisoners' in sentencing of Michigan man
Aug. 4 (UPI) -- Judge Amy Berman Jackson sentenced Karl Dresch, 41, to six months in prison after he pleaded guilty to entering the Capitol building during the Jan. 6 riot, saying he and other defendants are not "political prisoners."

U.S. News // 2 hours ago
Drone captures startling footage as Lake Oroville reduced to trickle
Lake Oroville, California's second-largest reservoir, looks like a shell of its typical self as the drought across the western United States continues to toast the region. 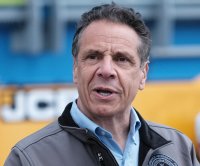 U.S. News // 5 hours ago
NOAA bumps up hurricane odds in mid-season update
Aug. 4 (UPI) -- The National Oceanic and Atmospheric Administration revised its predictions for the 2021 Atlantic hurricane season Wednesday, saying the region could see up to 21 named storms this year.

U.S. News // 7 hours ago
Slain officer, suspect in Pentagon attack identified
Aug. 4 (UPI) -- Law enforcement officials on Wednesday identified a police officer killed in this week's attack outside the Pentagon and the man accused of stabbing him.