WASHINGTON, Oct. 31 (UPI) -- U.S. counter-terrorism official John Brennan said Sunday the hunt for suspects in the bomb plot is not over and praised Saudi Arabia for helping to foil it.

Speaking on ABC's "This Week," Brennan, President Barack Obama's top adviser on combating terrorism, said, "I think the sophistication of these IEDs shows, at least in my mind, that it was an al-Qaida in the Arabian Peninsula effort, and that there are a number of people that are involved in this. And so it's not just these two individuals. We're looking for a lot more."

An engineering student and her mother have been arrested in Yemen.

On "Fox News Sunday" Brennan said, "We cannot presume that there are none other that are out there."

On CBS's "Face the Nation," he added, "Clearly, the sophistication of this device requires I think a number of people who are involved. We are concerned about individuals in Yemen who have very proficient bomb-making capabilities who are very dangerous."

"We owe a debt of gratitude to the Saudis. I think their actions really saved lives here."

But he added, "We feel as though we've stopped all of the packages that have come into the United States that were originating in Yemen."

Brennan told NBC's "Meet the Press" host David Gregory that "FedEx and UPS have stopped all the packages that are coming into the United States that were being mailed from Yemen."

U.S. News // 7 minutes ago
Judge rules Harvard owns slave images, not descendants
March 6 (UPI) -- A Massachusetts judge ruled this week that a series of slave images belong to Harvard University, but the ancestor of the subjects who were forced to strip to the waist for the photos plans to appeal. 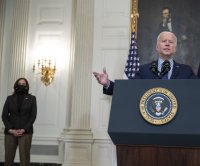 U.S. News // 18 hours ago
Senate hits roadblock in COVID-19 relief 'vote-a-rama'
March 5 (UPI) -- The Senate's efforts to vote on a series of amendments to President Joe Biden's COVID-19 relief bill hit a roadblock Friday over the extension of unemployment benefits.