WASHINGTON, June 17 (UPI) -- A Republican U.S. congressman says his apology to BP, which drew a storm of criticism and calls for him to step down from a House committee, was misconstrued.

Rep. Joe Barton, R-Texas, apologized Thursday to BP President and Chief Executive Officer Tony Hayward in his opening remarks during a subcommittee hearing, telling Hayward he was "ashamed" by the White House effort to force BP to create a $20 billion escrow fund to pay damages to victims of the worst oil spill in U.S. history.

"Tragedy of the first proportion that a private corporation can be subjected to what I would characterize as a shakedown, in this case, a $20 billion shakedown … ," Barton said.

After taking criticism from Republicans as well as Democrats for the remark, Barton retracted his apology to BP.

"I want the record to be absolutely clear that I think BP is responsible for this accident," Barton said after his round of questioning of Hayward Thursday afternoon, "(and) should be held responsible and should in every way do everything possible to make good on the consequences that have resulted from this action.

"If anything I said this morning has been misconstrued in opposite effect, I want to apologize for that misconstruction," he said.

Rep. Jeff Miller, R-Fla., whose district is affected by the BP oil spill, had ripped Barton for apologizing to the BP president, The Hill reported.

"I condemn Mr. Barton's statement," Miller said in a statement. "Mr. Barton's remarks are out of touch with this tragedy and I feel his comments call into question his judgment and ability to serve in a leadership on the Energy and Commerce Committee He should step down as ranking member of the committee."

Miller said he was shocked by Barton's "reprehensible comments that the government should apologize for the 'shakedown' of BP."

BP is responsible for the environmental disaster and "should pay for losses and damages, not the taxpayer," Miller said. "I am optimistic and hopeful that BP acted in good faith by opening the $20 billion escrow account, as several of us have requested."

U.S. News // 4 hours ago
U.N. nominee Thomas-Greenfield: Diplomacy more than 'handshakes and photo ops'
Jan. 27 (UPI) -- Ambassador nominee Linda Thomas-Greenfield began her confirmation hearing in the Senate on Wednesday, and said she plans to watch China to keep it from using the United Nations to achieve authoritarian goals.

U.S. News // 1 hour ago
Boeing reports record net loss of almost $12 billion for 2020
Jan. 27 (UPI) -- Planemaker Boeing said Wednesday it saw a significant decline in revenue over the last three months of 2020 -- and a total net loss for the year close to $12 billion, a record.

U.S. News // 3 hours ago
Eli Lilly says 2 drugs lower death rate among high-risk COVID-19 patients
Jan. 27 (UPI) -- Drugmaker Eli Lilly says it has an antibody cocktail that has proven to reduce hospitalizations and deaths for high-risk patients with COVID-19, by as much as 70%. 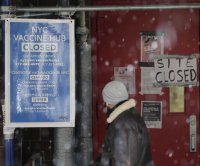 U.S. News // 3 hours ago
U.S. COVID-19 cases decline, but deaths again spike to over 4,000
Jan. 27 (UPI) -- Coronavirus cases across the United States declined on Tuesday and continue what appears to be a gradual decline, but deaths related to COVID-19 spiked -- to the fourth-highest daily toll since the pandemic began.

U.S. News // 11 hours ago
Police: Portland hit-and-run rampage not terrorism
Jan. 26 (UPI) -- Police in Portland, Ore., said Tuesday that detectives have found no evidence a series of hit-and-runs a day prior that resulted in the death of a pedestrian was motivated by terrorism.