But some friends and foes alike say her lack of experience as a judge leaves her as something of a question mark.

"Our trepidation regarding General Kagan is premised on the lack of a clearly identifiable record on the protection of our nation's civil rights laws," the letter said. "As women leaders, we greatly respect General Kagan's intellectual capabilities and highly accomplished record in the administration and academia. Nonetheless, there is a dearth of a specific emphasis on the civil rights laws utilized in the protection of racial and ethnic minorities and those traditionally disenfranchised in this nation."

The letter also said it was "especially disconcerting" that Obama has not seriously considered any black women for the job.

People For the American Way President Michael B. Keegan supported Kagan's nomination, but said he was looking forward to "learning more about the judicial philosophy she'll bring to the high court."

"Elena Kagan's nomination will bring to the Supreme Court a diversity of experience missing since Justice [Sandra Day] O'Connor retired in 2006," Leahy said on his Web site. "I have urged President Obama to look outside the judicial monastery to identify qualified nominees who will bring a diversity of life experience to the court. Elena Kagan is just such a nominee."

A senior minority member on the committee, Sen. Orrin Hatch, R-Utah, said on his Web site that since Obama has nominated Kagan, "the Senate must thoroughly and fairly evaluate her qualifications" for the Supreme Court.

"Judicial qualifications go beyond legal experience; any Supreme Court nominee should have an impressive resume. The more important qualification is judicial philosophy and a nominee's understanding of the power and proper role of a justice in our system of government," Hatch said.

"I will examine Ms. Kagan's entire record to understand her judicial philosophy," he said.

The ranking Republican on the committee, Sen. Jeff Sessions, who had hinted at a filibuster if he disapproved of the nominee, said besides Kagan's lack of experience the Senate needs to review "her decision as dean of Harvard Law School to personally and aggressively restrict the U.S. military's ability to recruit some of the brightest law students in the country because [she] opposed President Clinton's 'Don't Ask, Don't Tell' policy. Her challenge to the unambiguous federal law requiring equal access for military recruiters was unanimously rejected by the Supreme Court."

Sessions added, "I look forward to learning more about Ms. Kagan through this process and to hearing her testimony on these and other important matters"

From the right, David McIntosh, co-founder of the influential Federalist Society and former Indiana congressman, said in a statement: "I'm deeply disappointed that President Obama has chosen to nominate an individual who has demonstrated a lack of adherence to the limits of the Constitution and a desire to utilize the court system to enact her beliefs of social engineering. Solicitor General Kagan has been nominated with no judicial experience, a mere two years of private law practice, and only a year as solicitor general. ... She is one of the most inexperienced nominees to the U.S. Supreme Court in recent memory.

"Ms. Kagan's public comments should be highly disturbing to all Americans as they show what kind of a justice she will be. She has been a vocal opponent of military recruiters on the Harvard Law School campus, placing political correctness above national security in a time of war. Ms. Kagan abandoned the will of the American people and the Congress by challenging the Defense of Marriage Act, proving she will merely rule based on her personal political preferences and not the law."

The Judicial Crisis Network in Washington issued a statement saying, in part: "Solicitor General Elena Kagan is out of step with Main Street Americans, her limited record is outside the mainstream of American legal thought and she lacks any substantial qualifications to sit on the Supreme Court. [She] has no prior experience that qualifies her for the Supreme Court. [She] has never been a judge on any court, federal or state, trial or appellate."

Conservative legal watchdog Judicial Watch issued a statement from its President Tom Fitton saying: "President Obama's nomination of Elena Kagan to the Supreme Court is irresponsible. Ms. Kagan is a liberal activist and political operative with no experience as judge." 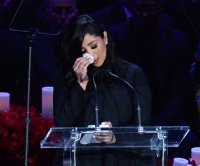 U.S. News // 23 hours ago
Andrew Yang concedes as NYC mayoral race likely to be decided by ranking system
June 22 (UPI) -- Voters in New York City will participate in primary elections on Tuesday to determine which two candidates will face off to replace outgoing Mayor Bill de Blasio this fall.

U.S. News // 13 hours ago
Senate holds rare hearing on D.C. statehood
June 22 (UPI) -- The Senate held a rare hearing to evaluate statehood for Washington, D.C., with supporters pushing for voting rights and opponents questioning the legality of creating a new state without a constitutional amendment.
Advertisement