NEW HOPE, Minn., March 23 (UPI) -- A New Hope, Minn., man said he threatened to harm Somalis because he was angry at people in his apartment building, court documents indicate.

James Miller, 49, was ordered held Monday on a $50,000 bond on charges of making terroristic threats against those attending a Somali cultural event at St. Cloud State.

The event had been advertised on Craigslist with an admissions price of $10 per person, the St. Cloud (Minn.) Times reported Tuesday.

"I'll bring my rifle. I'll gladly pay $10 for target practice," said a response to the post that police allegedly traced to Miller's computer.

Miller, who was arrested Friday, allegedly told police he posted the comment because he lives in an apartment building with a large Somali population and was angry with them.

"They have no respect for anyone else in the building," Miller was quoted as telling police. 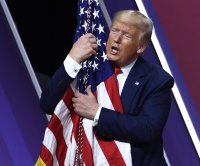