A freelance writer on assignment for Hustler requested photos of the body of Meredith Emerson, who was killed and dismembered in 2008 on Blood Mountain while hiking with her dog, The Atlanta Journal-Constitution reported. Fred Rosen said he wanted the photos for reference and the decision on publishing them would be up to his editor.

The Georgia Bureau of Investigation rejected the request. A spokesman said the state's Open Public Records Act protects the photos, which cannot be released without the explicit permission of Emerson's family.

"This is just an affront to the victim's family," the spokesman, John Bankhead, said. "It's incredible that anybody would ask for something like this."

Hustler released a statement saying the magazine's lawyers are considering an appeal. 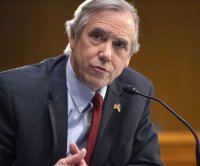