Paul Helmke, president of the Brady Campaign for gun control, speaks to reporters in front of the Supreme Court in Washington after the Court struck down the DC handgun ban on June 26, 2008. The Supreme Court, in a 5-4 ruling, affirmed the rights of individuals to own firearms, but the decision should leave most gun laws and regulations intact. (UPI Photo/Roger L. Wollenberg) | License Photo

CHICAGO, Feb. 28 (UPI) -- Otis McDonald, 76, lives in Morgan Park, a tough Chicago neighborhood where the same youngsters who used to shoot hoops in his back yard are now threatening his life.

A law-abiding citizen, McDonald wants to keep a handgun in his home to protect himself against gangs but that's against Chicago's gun-control laws.

"The people who want to control me, my family, my property -- these are the people who I want to protect myself from," McDonald told the Chicago Tribune.

McDonald's attempt to keep and use his weapon lawfully has been rejected by the trial court and the 7th U.S. Court of Appeals, both of which ruled in favor of the city. The U.S. Supreme Court takes up the issue Tuesday in McDonald vs. Chicago.

But allowing McDonald to have a gun for self-protection could mean huge upheavals in constitutional law, involving the Second and 14th amendments.

The Second Amendment reads: "A well regulated militia, being necessary to the security of a free state, the right of the people to keep and bear arms, shall not be infringed."

Why has the Second Amendment not been imposed on the states under the 14th Amendment, as other Bill of Rights amendments have been?

The Legal Community Against Violence provides a practical reason. The second amendment is "categorically different from other provisions of the Bill of Rights because it involves inherently lethal objects: guns." Such dangerous devices must be carefully and extensively controlled through states' and cities' power to self-regulate in light of the patterns of violence unique to each of those communities.

The lawyers for Chicago in McDonald said handguns are concealed easily and are thus particularly dangerous in cities.

"Homicides are most often committed with guns, especially handguns," the attorneys said, relying on Department of Justice statistics.

The historical reasons are murkier.

The 14th Amendment, adopted in 1868, states: "No state shall make or enforce any law which shall abridge the privileges or immunities of citizens of the United States; nor shall any state deprive any person of life, liberty or property, without due process of law; nor deny to any person within its jurisdiction the equal protection of the laws."

The privileges and immunities clause and the due process clause are the ones through which federal rights might be imposed on the states. The states and their respective county and municipal governments would be required to recognize and uphold any rights thus "incorporated against" the states.

In 1873, however, the Supreme Court handed down a decision on consolidated cases that undercut the privileges clause.

In the Slaughterhouse Cases, the Supreme Court ruled the privileges clause of the Fourteenth Amendment that butchers invoked to challenge a state-initiated slaughterhouse monopoly applied only on the federal, not state level.

The decision was never seriously challenged and so, throughout the ensuing 137 years, the privileges clause of the new amendment was essentially dead as a means to apply federal rights against the states because justices instead looked to the due process clause.

A trend of thought, however, has developed relatively recently that the framers of the 14th Amendment intended the privileges clause to be an avenue not only for applying against the states the same federally guaranteed personal protections of the newly freed slaves and the carpetbaggers, but for other rights, as well. McDonald attempts to revive the privileges clause before a Supreme Court apparently primed to be receptive to it.

If the Supreme Court were to reinvigorate the privileges clause, it would overrule the Slaughterhouse Cases and would open the floodgates for challenges not only of the Second Amendment, but for wholesale incorporation of federally guaranteed freedoms as yet unincorporated against the states.

At the same time that several justices have been inching toward revisiting the privileges clause on other issues, the stage has also been set for an increasingly favorable view of incorporating the Second Amendment through the due process clause.

Heller, which provides, in federal enclaves, an individual may possess a gun for private use, released its own Second Amendment flood to which McDonald has added significantly with its privileges-based appeal.

The Heller decision relied on the due process clause to allow a private citizen to possess a gun in the District of Columbia but restricted its ruling to federal enclaves. A number of gun lawsuits were filed in the wake of Heller hoping for extension of the ruling to the states.

McDonald is the first to reach the Supreme Court on a Second Amendment challenge that first and foremost invokes the privileges clause, with the due process challenge as a secondary argument.

McDonald could prevail on the due process argument as he secondarily claims his Second Amendment gun rights are incorporated piecemeal against Illinois and its cities by the Fourteenth Amendment. If so, the Supreme Court could incorporate against the states only the Second Amendment -- and possibly not even narrowly, considering Heller.

McDonald's primary argument is that his federal rights are protected wholesale under the privileges and immunities clause. If he wins on the privileges argument, then the due process issue in the case would be moot, but the decision would reestablish the Fourteenth Amendment as once again providing two viable avenues for requiring the states to protect federally guaranteed rights.

That the privileges clause could open the floodgates for bringing in other rights wholesale is precisely why the National Rifle Association is unhappy McDonald relies primarily on it: It could bring in a myriad of rights to the states the conservative group would just as soon keep out.

It is the same reason liberal groups have eagerly joined the fray, believing the forfeiture of gun control laws may be a small albeit deadly price to pay to strengthen free speech, abortion and gay rights, or to bring grand jury indictment requirements to the 25 states that do not yet have the Fifth Amendment provision for major felonies. Not surprisingly, approximately 60 groups and individuals have weighed in with non-party friend-of-the-court briefs on both sides.

Given the propensity of this Supreme Court to be sympathetic to pro-gun plaintiffs, it may come down not to whether the pro-gun position will prevail in this case, but how: via the privileges and immunities clause or the due process clause? Seeing the sign of the times (and polls show the high court's previously narrow position on the Second Amendment conflicts with the views of most Americans), it was wise for the many liberal groups to have jumped on the bandwagon, even if there are dangerous trade-offs for the realization of a slew of heretofore-only-dreamed-of rights.

U.S. News // 4 hours ago
Watch live: Conservative lawmakers, Mike Pence speak at CPAC
Feb. 27 (UPI) -- The 2020 Conservative Political Action Conference, the annual gathering of conservative activists and politicians, is underway in Maryland and will include a number of speakers Thursday.

U.S. News // 7 hours ago
ADL: Right-wing extremists killed 38 people in 2019
Feb. 27 (UPI) -- The vast majority of domestic extremist-related killings in the United States last year were committed by right-wing extremists, according to a new report from the Anti-Defamation League.

U.S. News // 7 hours ago
24 states consider bills to ban natural hair discrimination
EVANSVILLE, Ind., Feb. 27 (UPI) -- Nearly half of state legislatures will consider bills in the near future to protect a person's right to wear their hair naturally.

U.S. News // 17 hours ago
6 dead including gunman in Milwaukee shooting at Molson Coors
Feb. 26 (UPI) -- Six people died, including the suspected gunman, in a shooting Wednesday at a Molson Coors campus in Milwaukee, local authorities said. 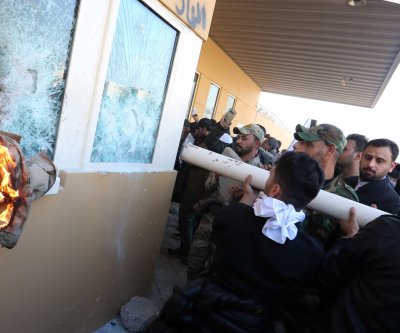