Prime Minister Jean-Max Bellerive says he has issued an order that children cannot be released for adoption without his personal approval, the Miami Herald reported Wednesday.

Bellerive told the Herald he has also ordered non-governmental organizations working in Port-au-Prince to stop picking up children found alone on the street.

He said the government fears that orphaned children may be collected for prostitution or slavery.

As Bellerive's order was taking effect, U.S. Embassy officials in Haiti scrambled to move as many orphaned children to the United States as possible.

A U.S. military cargo plane flew some 50 Haitian orphans to Sanford, Fla., near Orlando Monday after word surfaced that such flights were being suspended.

Meanwhile, Canadian Minister for State for the Americas Peter Kent told an Ottawa news conference Wednesday a flight carrying 52 Haitian orphans was due to arrive in hours. Most of the children were destined for homes in Quebec, where French is widely spoken.

The first group of 24 orphans arrived in Canada during the weekend.

Leaders planned to discuss Yemen Wednesday, followed by a world conference Thursday on Afghanistan to review President Hamid Karzai's agenda as outlined in his Nov. 19 inauguration address "and implementation of our strategy and support of Afghanistan's security, governance and development," Crowley said.

In Paris, Clinton is scheduled to meet with French President Nicolas Sarkozy and Foreign Minister Bernard Kouchner to discuss the situations in Haiti, Iran, Yemen, Afghanistan and Pakistan, Crowley said.

Clinton also is to deliver a speech on European security while in France, the spokesman said

Poll: Media not impressive as watchdog

A third of the poll's participants said news media have done an "excellent" or "good" job as a government watchdog, while 37 percent said media earned "fair" marks, results showed.

The findings come from a Gallup survey sponsored by the non-partisan First Amendment Center.

Forty-three percent of survey participants said media's collective performance as watchdog under Obama was equal to how news outlets did during previous administrations. However, 31 percent of respondents said they believed the media were worse, compared to 21 percent who said television, newspapers radio and Internet were doing a better job.

Results are based on nationwide telephone interviews with 1,026 adults Jan. 20-21 as part of Gallup Daily tracking. The margin of error is 4 percentage points.

Rep. Joe Wilson, R-S.C., gained name recognition in September when he shouted "You lie" as Obama addressed Congress during a live, prime-time broadcast.

"That was a one-time incident," he told McClatchy Newspapers in an interview published Wednesday. "I will continue, through my agreement with the White House, to discuss issues civilly."

Wilson apologized to White House Chief of Staff Rahm Emanuel immediately after Obama's healthcare overhaul address. He said he had said a nice conversation with the Obamas during a White House holiday party for congressional members in December.

"I have high respect for the president and the first lady," Wilson said.

The outburst helped the campaigns of Wilson and his Democratic challenger, Rob Miller, McClatchy said. Wilson and Miller raised a combined $4.75 million through Sept. 30, reporting a whopping $4.34 million of that total in the three weeks after Wilson's outburst.

ANNAPOLIS, Md., Jan. 27 (UPI) -- Legislation introduced in Maryland would legalize the sale of medical marijuana, including allowing it to be sold in drug stores.

A pair of bills introduced in the state legislature would make Maryland the 15th state to legalize cannabis for medicinal use, although one of the sponsors said the rules would be more stringent than other states.

While marijuana could be sold in pharmacies as well as specialized dispensaries, users would not be allowed to grow their own and they would have to receive a recommendation from a doctor with whom they have a long-term relationship. Other states allow patients to make a single visit to a physician, which critics contend makes it too easy.

The Baltimore Sun said Wednesday that Maryland has a law in place that allows the use of medical marijuana, but makes no provision for legal points of sale. Supporters of the new laws say the current situation forces sick people to seek out illegal dealers for their supply.

MIAMI, Jan. 27 (UPI) -- A Florida judge allowed a lesbian to adopt a child while an appeals court decides whether the state's ban on gay adoptions is unconstitutional, records show.

The decision by Miami-Dade Court Circuit Judge Maria Sampedro-Iglesia is the third finalized adoption by a gay parent or couple in Florida, the Miami Herald reports.

The Herald obtained a copy of Sampedro-Iglesia's order which says "there is no rational connection between sexual orientation and what is or is not in the best interest of a child."

The ruling came in the case of Vanessa Alenier who took custody of an infant relative who had been taken by child welfare workers.

The Florida Department of Children & Families says it is currently deciding whether to appeal the judge's decision.

U.S. News // 34 minutes ago
U.N. chief gives bleak outlook on climate change: 'This is suicidal'
Dec. 2 (UPI) -- U.N. Secretary-General Antonio Guterres on Wednesday gave a dire assessment of humanity's fight against global warming, warning that the world's top priority must be protecting the Earth -- and our survival.

U.S. News // 2 hours ago
FDA approves Roche test that detects antibodies that fight coronavirus
Dec. 2 (UPI) -- Federal regulators have given emergency approval for a new blood test that can measure antibodies in people who have been exposed to the novel coronavirus that causes COVID-19.

U.S. News // 5 hours ago
Gallup: Confidence in U.S. economy at highest point in 8 months
Dec. 2 (UPI) -- Americans are becoming more optimistic about the economy, almost a year after the start of the coronavirus crisis as multiple companies are nearing distribution of COVID-19 vaccines, a Gallup survey showed Wednesday.

U.S. News // 9 hours ago
Historians, watchdog sue Trump to prevent records from being destroyed
Dec. 2 (UPI) -- Historians and a government accountability watchdog sued the Trump administration to force it to preserve complete records amid the presidential transition.

U.S. News // 13 hours ago
California dive boat captain charged over fire that killed 34
Dec. 1 (UPI) -- A federal grand jury on Tuesday indicted the captain of a dive boat that went up in flames last year off the coast of Southern California, killing 34 people on board. 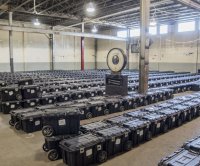