U.S. Supreme Court: Throwing away the key for sex offenders?

Host of America's Most Wanted John Walsh speaks at a press conference about HR 4472 the Child Protection and Safety Act of 2005, in Washington on August 2, 2006. The Act is named after Walsh's son, Adam, who was kidnapped and murdered in 1981 and is designed to protect kids from sexual exploitation and child violent crime. (UPI Photo/Kevin Dietsch) | License Photo

WASHINGTON, Jan. 17 (UPI) -- The U.S. Supreme Court, after hearing argument last week, is set to decide whether the U.S. government has the power to commit indefinitely any federal prisoner who shows signs of being a sexual predator.

The issue is not whether it is a good idea to keep someone behind bars after serving a sentence but who has committed no new crime -- though there is considerable disagreement about the wisdom of such a policy. The issue is whether the federal government is usurping the power of the states.

The need to control sexual predators in some fashion seems to be compelling. In case after case, the same set of depressing facts ends in tragedy, such as the case of 11-year-old Sarah Foxwell in Maryland last month.

A child disappears, sometimes from her own bedroom. There is a frantic search. A registered sex offender is arrested. The child is found dead.

In the Foxwell case, the Wicomico County sheriff has promised to seek the death penalty against the suspect, Thomas Leggs Jr., 30, of Salisbury, Md. But nothing will bring the child back.

The case of 6-year-old Adam Walsh shocked the conscience of the nation in 1981. He disappeared while shopping with his mother in Hollywood, Fla. Only his head was later recovered. A convicted serial killer, who died in prison of natural causes in 1996, was blamed but never charged with the crime.

The boy's father, John Walsh, went on to host television's "America's Most Wanted," often cited by the FBI as being instrumental in helping to catch violent killers.

In 2006, President George W. Bush signed the Adam Walsh Child Protection and Safety Act, which among other things allows "the federal government to place in indefinite civil commitment 'sexually dangerous' persons," a federal appeals court said. The civil commitment procedures are not limited to prisoners convicted of sexual offenses, but can be applied to any prisoner in federal custody who has a history of illegal sexual conduct or attempts at such conduct.

So far, the commitment provisions of the federal act have been sparsely applied. Of the 15,000 or so federal prisoners with a history of sexual offenses, only about 100 have faced commitment procedures. But the program could be rapidly expanded in the face of public pressure.

In January 2009, an appeals court panel in Richmond, Va., said the act's provision granted "the federal government unprecedented authority over civil commitment -- an area long controlled by the states." The appeals court panel agreed with a federal judge that the provision "exceeds the limits of congressional power and intrudes on the powers reserved to the states." The Obama administration then asked the Supreme Court for review.

About 20 states have civil commitment laws to continue to imprison sexual predators after they have served their sentences.

In 1997's Kansas vs. Hendricks, the Supreme Court ruled 5-4 that the Kansas Sexually Violent Predator Act -- which sets up procedures for the civil commitment of persons who due to a "mental abnormality" or a "personality disorder" are likely to engage in "predatory acts of sexual violence" -- did not violate the "due process," or fair proceedings, guarantee of the Constitution.

But in 2002's Kansas vs. Crane, the high court ruled 7-2 that Kansas and other states must make some determination that a sexual predator cannot control his behavior when committing someone to an indefinite term.

The Supreme Court heard argument last week in the Adam Walsh Child Protection and Safety Act challenge. The dispute is making for some strange bedfellows.

The Obama administration, represented by Solicitor General Elena Kagan, aggressively defended the federal act in argument. The administration's brief to the high court, defining who is eligible for civil commitment, said "the term 'sexually dangerous person' requires the government to make two showings (to a federal judge) by 'clear and convincing evidence.' ... First, the government must prove that the (prisoner) has previously 'engaged or attempted to engage in sexually violent conduct or child molestation.' ... Second, the government must prove 'that the person suffers from a serious mental illness, abnormality, or disorder as a result of which he would have serious difficulty in refraining from sexually violent conduct or child molestation if released.'"

The committed prisoner can request regular re-evaluation at six-month intervals, but the commitment can be open-ended.

The government's argument relies, not on the ubiquitous Commerce Clause -- which gives Congress the power to regulate interstate commerce and is used to underwrite a broad category of federal laws -- but the Necessary and Proper Clause of the Constitution: "The Congress shall have power ... (to) make all laws which shall be necessary and proper for carrying into execution the foregoing powers, and all other powers vested by this Constitution in the government of the United States. ... "

Besides the Obama administration, 31 state attorneys general told the Supreme Court they support the federal act.

On the right, the American Enterprise Institute says the case "represents an opportunity for the (Supreme) Court to help restore federal power to proper constitutional limits."

The AEI urges the self-styled Tea Party protesters -- a loose coalition of protesters and bloggers who oppose big government and President Barack Obama -- to join the fight.

The conservative think tank said sex offenders should be committed, but, "Given how poorly federal policy has performed in many areas, one wonders whether things might be better if Congress had less on its regulatory plate. The (Supreme) Court should take this opportunity to rebuke Congress's gluttony by preventing it from meddling in areas that lawfully belong to the states."

And not everyone agrees that recidivism is inevitable for sexual offenders. In 2008, columnist Carl Bialik wrote in The Wall Street Journal: "It's common to hear claims that (past sexual offenders are) sure to commit more sex crimes. ... But ... the numbers don't bear this out. Recidivism rates vary widely depending on which crimes are counted, the time frame of the studies and whether repeat offenses are defined by convictions, arrests or self-reporting. But even the author of a widely published report suggesting a recidivism rate of 52 percent, Wisconsin psychologist Dennis Doren, told me of the notion that all sex criminals are likely to re-offend, 'There is no research support for that view, period.'"

But such questions are not part of the current debate. No court, not even the Supreme Court, wants to appear timid or soft when it comes to those who prey on children or the defenseless. The question is only which level of government will do the committing.

In argument last week, even normally conservative justices who usually question the usurpation of state rights by the federal government seemed to agree with the Obama administration.

Only Justice Antonin Scalia, a variety of observers agree, questioned the constitutionality of the Adam Walsh Act from the bench.

The justices should hand down a decision in the case, U.S. vs. Comstock et al, sometime before the summer recess begins in late June.

U.S. News // 2 hours ago
Fertilizer, grain shortages contributing to rising food prices
May 17 (UPI) -- A fertilizer shortage is just one part of a confluence of factors behind rising food prices across the United States, as the Biden administration continues looking for financial solutions for the agriculture industry.

U.S. News // 3 hours ago
Greek PM Mitsotakis hails shared interest in democracy in speech before Congress
May 17 (UPI) -- Greek Prime Minister Kyriakos Mitsotakis reaffirmed Greece's relationship with the United States on Tuesday during remarks before a joint session of Congress.

U.S. News // 11 hours ago
Defense officials: Reports of unidentified objects 'frequent, continuing'
May 17 (UPI) -- Pentagon officials told a House panel Tuesday that reports of "Unidentified Aerial Phenomena" are getting more frequent -- and there is not always a ready explanation. 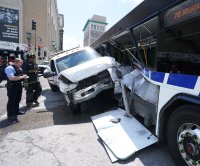