BLOOMINGTON, Ill., Jan. 3 (UPI) -- The editor of The Pantagraph, a daily newspaper in Bloomington, Ill., says he is suspending readers' Web site comments on local stories.

Editor Mark Pickering, writing on the newspaper's Web site Sunday, said that a proliferation of "personal attacks and assertions that have nothing to do with" the stories the comments are attached to have prompted him to shut down the feature on Pantagraph.com through the end of the New Year's holiday weekend.

"This 'cooling off' period is meant as a strong reminder to our online readers: That the reason comments are allowed in the first place is to foster a 'spirit of community involvement and conversation,'" he wrote.

"Unfortunately, some commenters choose to ignore the rules of fair play and civil discourse, which only yields responses from others that turn a legitimate 'discussion' into a free-for-all that has no place on our Web site," he wrote.

U.S. News // 3 hours ago
Texas man found guilty of killing San Antonio detective
July 27 (UPI) -- A Texas jury has convicted a man of capital murder in the shooting death of a San Antonio police detective in 2016.

U.S. News // 4 hours ago
California, Oregon wildfires grow; firefighters optimistic about containment
July 27 (UPI) -- The Dixie Fire in Northern California grew to more than 208,000 acres Tuesday, but fire officials said they were optimistic they could get the wildfire under control in the coming days. 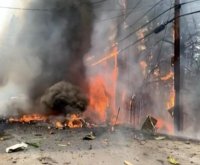