TOKYO, Dec. 16 (UPI) -- Japan postponed its decision on the relocation of the U.S. Marine air base on Okinawa until next year although Washington had argued against any such delay.

Defending his government's decision, Japanese Prime Minister Yukio Hatoyma said there was no other way to deal with the Marine Corps air station at Futenma because of the realities in Okinawa, Kyodo News reported Wednesday.

U.S. Marine Corps commandant Gen. James Conway called the Japanese decision "unfortunate" as it did not set any deadline, Kyodo said in a report from Washington.

The Marine station has become an issue since the Hatoyama government came to power in September.

Under a 2006 deal, reached after years of tough negotiations, the United States agreed to move the station from its current location to a less populated part of Okinawa. But the Hatoyama government had campaigned on moving it out of Okinawa or even out of Japan.

The United States has firmly said there can be no change in the agreement, which also calls for moving about 8,000 Marines to Guam.

General Conway was quoted as saying the Japanese decision could delay the implementation of the 2006 bilateral agreement set to be completed by 2014, Kyodo reported.

Hatoyama was quoted as saying his government "has its own policy'' and it will "seek understanding (from Washington) in the course of negotiations.''

On Tuesday, Hatoyama said he will seek a new relocation site for the air station other than what was agreed to in the 2006 deal but said he would need ''several months'' to do that, the report said.

U.S. News // 1 hour ago
Abortion rights council calls on California to pay for out-of-state patients if Roe vs. Wade falls
Dec. 8 (UPI) -- A council made up of abortion rights and women's health advocates recommended Wednesday that California prepare to provide abortion access -- and funding -- to all Americans if the Supreme Court overturns Roe vs. Wade.

U.S. News // 3 hours ago
Biden pulls nomination for top banking nominee over concerns in Senate
Dec. 8 (UPI) -- President Joe Biden has withdrawn his nomination of Saule Omarova to take over the post, recognizing that she doesn't have the support for Senate confirmation.

U.S. News // 4 hours ago
Job openings in U.S. rise to 11 million amid slight decline in those who quit
Dec. 8 (UPI) -- Employers nationwide had 11 million job openings during the month of October, nearly a record, and the number of Americans who quit their jobs that month dipped slightly -- but is still way above normal.

U.S. News // 4 hours ago
Roku reaches deal to keep YouTube after 8 months of dispute
Dec. 8 (UPI) -- Facing the prospect of losing YouTube from its popular streaming service, Roku announced Wednesday that the two companies have reached a deal to keep it there for at least a few years. 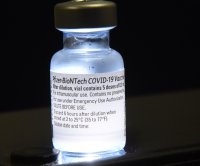 U.S. News // 6 hours ago
Biden visits Kansas City to underscore benefits of $1.2T infrastructure plan
Dec. 8 (UPI) -- President Joe Biden travels to Kansas City on Wednesday in a trip to promote the new $1.2 trillion bipartisan infrastructure bill and explain how it's going to create thousands of jobs in places like the Midwest.
Advertisement