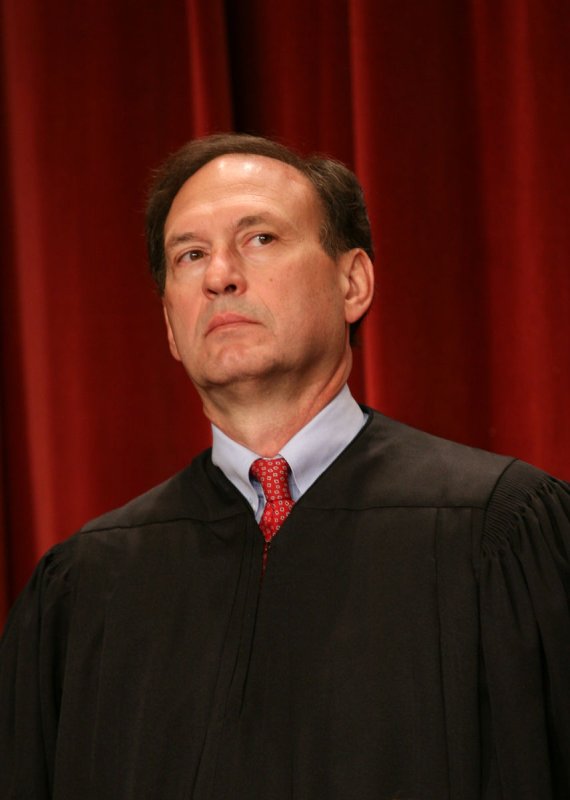 Samuel Alito is seen after the Supreme Court Justices of the United States posed for their official "family" group photo and then allowed members of the media to take photos afterward on September 29, 2009, at the Supreme Court in Washington. UPI/Gary Fabiano/POOL | License Photo

Police remove a protester who was disrupting President Barack Obama's commencement address at the University of Notre Dame in South Bend, Indiana on May 17, 2009. Notre Dame's award of an honorary law degree to Obama caused an uproar among Roman Catholics because his views on abortion are in direct conflict with church teaching. (UPI Photo/Brian Kersey) | License Photo

Pro-choice supporters rally in front of the U.S. Supreme court after the March for Life anti-abortion rally on January 22, 2009. Pro-life and pro-choice supporters descended on Washington to show their beliefs on abortion on the 36th anniversary of the Roe v. Wade Supreme Court making abortion legal. (UPI Photo/Alexis C. Glenn) | License Photo

Pro-life supporters rally in front of the U.S. Supreme court during the March for Life anti-abortion rally on January 22, 2009. Pro-life and pro-choice supporters descended on Washington to show their beliefs on abortion on the 36th anniversary of the Roe v. Wade Supreme Court making abortion legal. (UPI Photo/Kevin Dietsch) | License Photo

An anti-abortion protester demonstrates prey in front of the U.S. Supreme Court as part of an American Life League (ALL) protest to bring attention to the 35th anniversary of the Roe vs. Wade Supreme Court case, which made abortions legal in the United States, in Washington on January 21, 2008. (UPI Photo/Kevin Dietsch) | License Photo

An anti-abortion protester demonstrates in front of the U.S. Supreme Court as part of an American Life League (ALL) protest to bring attention to the 35th anniversary of the Roe vs. Wade Supreme Court case, which made abortions legal in the United States, in Washington on January 21, 2008. (UPI Photo/Kevin Dietsch) | License Photo

Pro-Choice demonstrators rally in front of the Supreme Court while arguments precede inside on the Scheidler and Ayotte abortion case, in Washington on November 30, 2005. This is the third time abortion has come into debate in the Supreme Court. (UPI Photo/Kevin Dietsch) | License Photo

WASHINGTON, Nov. 1 (UPI) -- Is abortion doomed in the United States? Probably not.

But with the changed equation on the U.S. Supreme Court -- Justice Samuel Alito succeeding Justice Sandra Day O'Connor in 2005 -- the prospects for more restrictions on a woman's right to an abortion seem to be rising.

For anxious advocates hoping to defend the right in the ongoing culture war, abortion may seem like Santiago's giant marlin in Hemingway's "The Old Man and the Sea." Santiago brings home what he can of the marlin, strapped to the side of his small boat, but sharks have stripped it to the bone.

For re-energized opponents of abortion, the current makeup of the high court offers hope, not of an outright ban, but of a gradual dilution of a right -- the right to kill the "unborn" -- they never believed existed in the first place.

There is no abortion case now on the Supreme Court's docket, but one is coming up fast on the outside from the country's heartland, and the justices may find themselves having to deal with it before recessing for the summer in late June.

Two Oklahoma laws were scheduled to go into effect Sunday. One would have required women seeking an abortion to fill out a 10-page questionnaire about their personal history and the reasons they were seeking an abortion, Rightjuris.com reports. Results would be posted on the Web.

The other would require women seeking an abortion to listen to a doctor as he or she described the fetus during an ultrasound.

Both are being challenged in the state courts. Last Monday, a state judge temporarily blocked the questionnaire provision on technical grounds. The law addresses unrelated issues in one bill, the judge said, in violation of the state Constitution.

Liberals and abortion rights advocates are bringing big guns to bear in the case. In an editorial titled "Oklahoma vs. Women," The New York Times said anti-abortion activists "found great encouragement" in the 2007 Supreme Court decision upholding a federal ban on "partial-birth" abortion. "Soon, they began looking for other inventive restrictions on reproductive rights for testing in the courts. In May, Oklahoma state lawmakers approved a beaut."

State lawmakers say they just want to find out why women seek abortions. But the Times contends, "The law's purpose is political. It's real aim is to persuade doctors to stop performing abortions by placing new burdens on their practice, to intimidate and shame women and to stigmatize a legal procedure that one in three women have at some point in their lives."

The Supreme Court has addressed aspects of the abortion issue a number of times, but two cases stick in the public's mind as the most important: 1973's Roe vs. Wade, the 7-2 ruling that recognized a woman's right to an abortion based on precedent that had found a constitutional right to privacy, and 1992's Planned Parenthood vs. Casey, which generally upheld Pennsylvania's restrictions on abortion except for a provision requiring spousal notice before the procedure.

As an appellate judge in Philadelphia, Alito said in dissent before the Supreme Court ruling that he would have upheld the spousal notice provision.

Critics who see Alito as a sleeping threat to abortion also point to his 1985 application for a promotion at the Reagan Justice Department -- first obtained by The Washington Times -- in which he bragged that as a department lawyer he was proud of his contribution to Supreme Court cases arguing that "racial and ethnic quotas should not be allowed and that the Constitution does not protect a right to an abortion," adding "I personally believe very strongly" in those positions.

However, a number of analyses of Alito's opinions in the lower court suggest he is less than a total culture warrior against abortion, unlike Justice Antonin Scalia.

"Judge Alito's record on abortion is more complicated than the caricatures would suggest," The Washington Post said prior to his confirmation in 2005. "His opinions imply a discomfort with legal abortion and suggest that he may be more willing than … O'Connor to uphold restrictions on abortion. But his writings also reflect an effort to diligently apply Supreme Court precedent in a changing and controversial area of law. They offer no definitive word as to how he would vote on whether to overrule Roe (vs. Wade) if presented with an opportunity."

In fact, as an appellate judge Alito voted to strike down New Jersey's ban on "partial-birth" abortion -- usually defined as "intact dilation and extraction" or "evacuation" regardless of when it occurs in a pregnancy -- in 2000 because the Supreme Court had struck down Nebraska's similar ban several weeks before.

In 2000, O'Connor was part of the five-justice majority signing on to Justice Stephen Breyer's judgment striking down the Nebraska ban as unconstitutional.

Then Alito succeeded O'Connor in 2005, and changed the equation.

In 2007, the high court again produced a 5-4 majority on "partial-birth" abortion, but with Alito on board, the majority ruled Congress had the right to enact such a ban. Take one vote from column A and put it in column B, and you have a different result.

In other words, Alito was willing to join the majority restricting a form of abortion, but would not, at least in 2007, join Thomas and Scalia in asserting that the right to an abortion didn't exist.