RICHMOND, Calif., Oct. 28 (UPI) -- Five people have been arrested in the gang rape and robbery of a 15-year-old girl outside of a high school's homecoming dance, Richmond, Calif., police said.

Police also raised their estimate of the number of people present during the two-hour assault on the girl outside of Richmond High School, ABC News reported Wednesday. Initially police thought 20 people either participated in the attack or observed it.

Police arrested three people Tuesday, including a 17-year-old boy who turned himself in to police, ABC News said. A 16-year-old boy and a 21-year-old man also were taken into custody Tuesday.

Police said they think as many as 10 people took part in the assault, while 20 people watched. No one who was present during the assault tried to stop it or called police, and some are suspected of taking pictures, officials said..

"These suspects are monsters. And, I don't understand how this many people capable of such atrocious behavior could be in one place at one time," Richmond Police Lt. Mark Gagan told KGO-TV, San Francisco.

Police officers found the girl semi-conscious, curled up near a lunch table.

West Contra Costa Unified School District spokesman Marin Trujillo defended the school's security and said the dance itself was a success "in terms of safety."

"Nothing happened at the event. We're currently exploring our protocols to make sure that we can expand them, and make sure that this isolated incident doesn't get repeated again," Trujillo told KGO-TV. 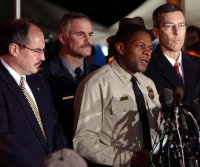 U.S. News // 12 hours ago
Stocks fall to new lows Friday on news of emerging COVID-19 variant
Nov. 26 (UPI) -- News of a new and more dangerous strain of the coronavirus sent the stock market reeling Friday, where the Dow Jones, S&P 500 and Nasdaq Composite all posted the kind of losses they have not seen in months.