NEW YORK, Oct. 7 (UPI) -- An investigation by the city of New York found "it is both feasible and easy for criminals to illegally buy guns at gun shows," city officials said Wednesday.

Investigators said 94 percent of licensed dealers and 63 percent of private owners sold guns to customers who said they could not pass a background check at seven gun shows in Nevada, Idaho and Tennessee.

Licensed gun sellers are required to conduct checks on prospective buyers using the National Instant Criminal Background Check System. Federal law exempts private sellers from such checks but prohibits them from selling guns to people "they know" or "have reason to believe" are prohibited by law from purchasing a firearm.

"The investigation shows that it is feasible and easy for criminals to illegally buy guns at gun shows," the report concluded.

"Our position is very simple, and it's something we have been saying for decades: If anyone breaks the law, arrest them and prosecute them," Arulandam said. 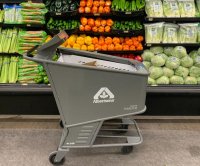 U.S. News // 2 hours ago
Veeve to deploy "Smart Carts" at Albertsons grocery stores later this year
May 19 (UPI) -- Seattle-based start-up Veeve and grocery chain Albertsons announced a deal Thursday to deploy Veeve Smart Carts in "a few dozen" of its stores by the end of the year.