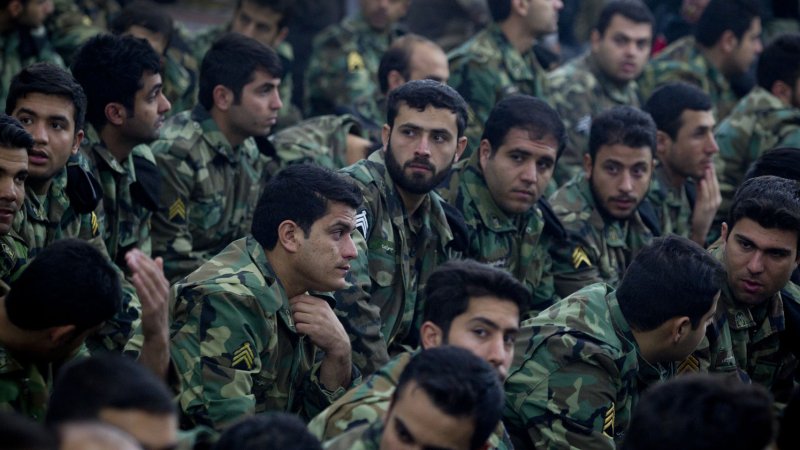 A supporter of Iran's newly elected president Hassan Rouhani flashes a victory sign as the members of Iranian Revolutionary Guard are standing in front of them at he shrine of Iran's late leader Ayatollah Khomeini in Tehran, Iran on June 16, 2013. UPI/Maryam Rahmanian | License Photo

BEIRUT, Lebanon, June 17 (UPI) -- As Western powers prepare to provide weapons to rebels in Syria's civil war, Iran is reported to be planning to send a 4,000-man contingent of Revolutionary Guards to beef up President Bashar Assad's forces.

Britain's Independent newspaper reports Tehran "is now fully committed to preserving Assad's regime, according to pro-Iranian sources who have been deeply involved in the Islamic Republic's security, even to the extent of proposing to open up a new 'Syrian' front on the Golan Heights against Israel."

There has been no substantiation of the report written from other sources.

But if the Independent report is correct, sending in combat units of the powerful Guard Corps, possibly from the elite Al-Quds Force that reportedly has been involved in the conflict for many months, it signals a sharp escalation in Iranian support for Assad and in the fighting that's now well into its third year.

The Independent's dispatch comes as Tehran's influence in Syria is stronger than it has ever been since Assad's father struck an alliance with Iran in 1980.

The January assassination of a senior Revolutionary Guards general in Syria underlined how strategically important Syria is for Iran as its gateway to the Levant and the Mediterranean, and confronting Israel.

Hezbollah, the Lebanese Shiite movement that is Iran's proxy in the Levant, reportedly has thousands of fighters in Syria bolstering Assad.

But the Independent report comes amid growing pressure on Hezbollah within the Sunni-dominated Arab world, and most particularly at home in Lebanon, over its participation in the Syrian war.

This is happening even among Shiites, fueled by the Hezbollah dead coming home in body bags.

But there's speculation the Revolutionary Guards contingent may be required because Hezbollah is reducing its force in Syria, estimated as high as 5,000.

The Independent report gave no time frame for dispatching the alleged Iranian expedition. But it coincides with reports that Assad's forces and its allies are engaged in a military build-up to seize control of the northern city of Aleppo, Syria's largest city and its commercial heart.

The regime, reinforced by Hezbollah, went on the offensive several weeks ago in central Syria and on June 5 stormed the strategic rebel stronghold of Qusair.

The operation was spearheaded by Hezbollah fighters, who reportedly suffered hundreds of casualties fighting the predominantly Sunni rebels.

The Iranian-backed Hezbollah has come in for mounting criticism in Lebanon for the military support it's given Assad's widely despised regime.

Nasrallah claims it's defending Lebanon against a U.S.-Israel plot and encroaching Sunni jihadists rather than acting as Iran's proxy to maintain Tehran's influence in the region through Syria by killing fellow Arabs.

The intensity of this criticism has apparently shaken Hezbollah, which has amassed considerable political power in Lebanon.

Its relations with Lebanon's Sunnis, always uneasy, have sharply deteriorated.

This was due in part to the February 2005 assassination of Rafik Hariri, an anti-Syrian Sunni leader, for which four members of Hezbollah have been indicted by a United Nation-mandated international tribunal.

Hariri's murder in a massive bombing in central Beirut left Lebanon's Sunnis without an effective leader.

Hariri's eldest son, Saad, became prime minister but had none of the charisma or political acumen of his father and after Hezbollah brought down his government in 2011 he fled abroad in fear of his life, living behind massive security in Paris or Riyadh.

In this political vacuum, many moderate Sunnis have moved behind more radical leaders and are flirting with hard-line jihadists.

Militarily, Lebanon's Sunnis are weak, although they dominate the Internal Security Forces. But many Lebanese Sunnis are in Syria with the rebels, who include hardcore jihadists from Iraq and North Africa.

Nasrallah took Hezbollah, the most powerful and best-armed force in Lebanon, into uncharted waters when he committed it to supporting Assad, Hezbollah's longtime and sometimes uneasy ally.

Anti-Hezbollah anger in Lebanon swells by the day. About 200 Lebanese have been killed in sectarian clashes in recent months.

On Sunday, Hezbollah activists protecting the Iranian Embassy in Beirut shot dead a student leader during an anti-Hezbollah protest. He was also a Shiite, underlining growing splits within that community.