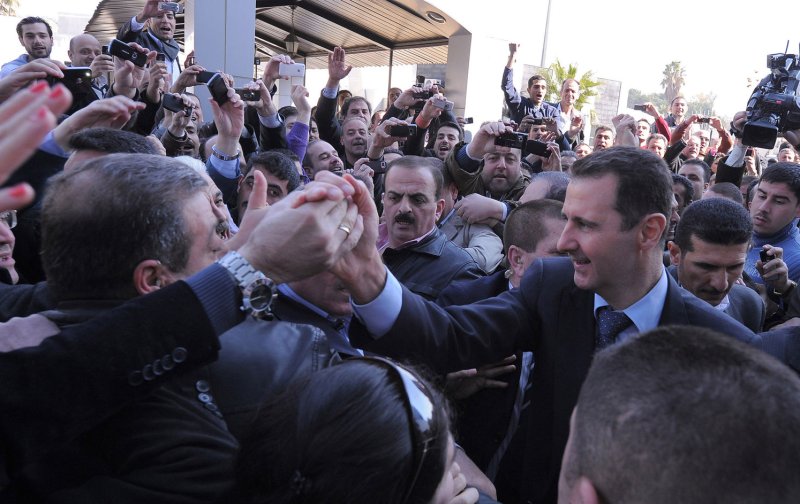 A handout picture released by the Syrian Arab News Agency (SANA) shows Syrian president Bashar al-Assad (R) shaking hands with his supporters upon his arrival to vote for the referendum on a new constitution, at a polling station, in Damascus, Syria, February, 26 2012. Syrians began voting on February 26 on a new constitution that the government says will introduce political pluralism. More than 14,000 polling stations opened nationwide for about 15 million eligible voters. The opposition announced a boycott of the referendum. UPI. | License Photo

Demonstrators take part in a angry protest against Syria's President Bashar al-Assad after Friday prayers in Binsh near Idlib in Syria, February 24, 2012. Syrian troops shelled the rebel stronghold in Homs for the 22nd straight day, after a pause allowed relief workers to evacuate some civilians, monitors said. UPI | License Photo

More than half of the 14.5 million eligible voters took part in the vote, officials said. Of those, 89.4 percent voted in favor of the new constitution, Interior Minister Maj. Gen. Mohammad Ibrahim al-Shaar told the official Syrian Arab News Agency.

The minister praised the high turnout despite threats by "armed terrorist groups" in the country.

The constitution would impose a seven-year term limit on the president. There is no mention of the ruling Baath Party in the draft document.

Syria is on the cusp of civil war nearly a year into an uprising against Syrian President Bashar Assad. The United Nations estimates at least 6,000 people have died in the uprising, noting high-ranking government officials are likely committing crimes against humanity in the country.

Members of the United Nations are divided over how to respond to the crisis. Russia and China have objected to foreign interference, prompting Western powers to tighten economic sanctions in Assad's regime.

The International Committee of the Red Cross said Monday it gained access to Hama for the first time since mid-January. The ICRC and Syrian Red Crescent are working with the opposition and the government to evacuate those wounded during the conflict.