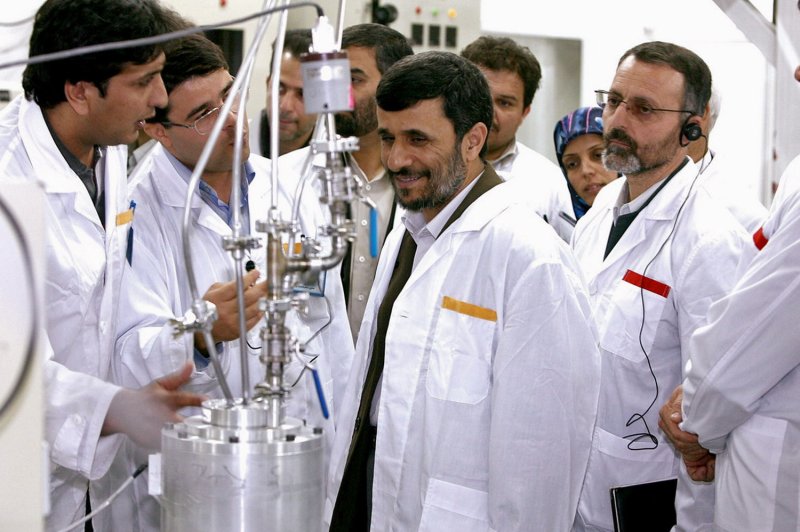 DUBAI, United Arab Emirates, Jan. 23 (UPI) -- Iran's new uranium enrichment plant buried under a mountain outside the holy city of Qom could become the crucial factor in determining whether the United States launches a barrage of military strikes on the Islamic Republic.

Tehran announced Jan. 9 that it had started uranium enrichment at the heavily guarded underground Fordow facility on the fringe of Iran's Great Salt Desert 100 miles south of Tehran.

Enriched uranium can have civilian uses but it's the critical part of the process in producing weapons-grade uranium for nuclear weapons.

The Iranian move was in defiance of escalating U.S.-led Western pressure on the fundamentalist regime to curb such activity.

The Iranians had been saying for months they planned to move their uranium-enrichment equipment to Fordow from the main enrichment plant at Natanz, in west-central Iran, to dramatically boost capacity.

In fact, Western intelligence sources say, transfer of the thousands of centrifuges central to the enrichment process began in the summer of 2011.

The existence of Fordow, which the Iranians carved out of a mountainside over four years, was first disclosed by U.S. President Barack Obama in September 2009. Iran later acknowledged it was building the facility but claimed it was for peaceful purposes, as it claims its entire nuclear program to be. But Tehran has never explained why it sought to keep the Qom plant secret.

One reason the Fordow start-up rang alarms bells in the West is that it came hard on the heels of a warning from the International Atomic Energy Agency, a U.N. watchdog, that there was evidence Iran had been working on developing a nuclear warhead for its intermediate-range ballistic missiles.

These are capable of hitting U.S. allies like Saudi Arabia in the Persian Gulf, a region, where the United States has major military bases and troop deployments, as well as Israel.

The concentration of centrifuges in the Fordow bunkers is a timeline "most relevant to military action," observed Mark Fitzpatrick, director of non-proliferation at the International Institute for Strategic Studies, a leading London think tank.

Fordow will afford greater protection for the centrifuges than the Natanz plant.

But the timing of the Iranian move may have had more to do with the swelling confrontation between Iran and the United States over Tehran's threats to close the strategic Strait of Hormuz, a vital export artery for Persian Gulf oil.

But what no doubt interests Western military commanders and planners is that U.S. officials say the work on reinforcing Fordow's natural protection deep in its mountain fastness hasn't been completed.

The U.S. weapon of choice against underground nuclear facilities like Fordow is the GBU-57 Massive Ordnance Penetrator, a 14-ton bomb that can drive through 200 feet of reinforced concrete and is delivered by B-2 and B-52 bombers.

Israel, which has repeatedly threatened to launch pre-emptive attacks against Iran's nuclear infrastructure, would likely want to carry out such a strike itself but it doesn't have bunker-busting bombs powerful enough to do the job.

And anyway, it seems there are questions about the reliability of the laser-guided GBU-28 bombs -- one-third the size of the MOP -- which the Americans finally agreed to supply the Jewish state in September 2011.

Israel received 55 of the 5,000-pound precision-guided bombs in a gesture intended by Washington to improve strained ties with Israel over its constant threat to attack Iran unilaterally.

The Jerusalem Post reported that Israel is "seeking clarifications from the United States to ensure that bunker-buster bombs it recently purchased are not carrying defectives fuses that could cause their premature detonation."

This concern arose after the U.S. Justice Department announced Dec. 23 it had reached a settlement with the Kaman Corp., which allegedly substituted fuses made for the bomb, under which Kaman will pay the U.S. government $4.75 million.

The Defense Department announced in September 2010 it had awarded Kaman Precision Products, a Kaman subsidiary, a $35 million contract to provide fuses for GBU-28s sold to four foreign countries, apparently including Israel.

The United States has long opposed a unilateral Israeli strike against Iran, saying it would likely touch off a potentially catastrophic conflict across the Mideast.