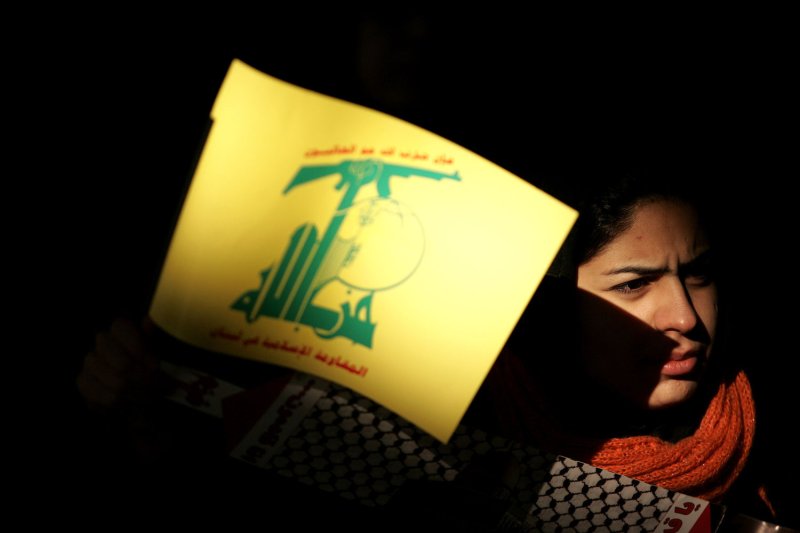 An Iranian woman holds a poster with Hezbollah's signas she attends a demonstration at Tehran university in Tehran, Iran on February 2, 2009. (UPI Photo/Mohammad Kheirkhah) | License Photo

The Israeli Foreign Ministry declined to discuss which missions had been shuttered Tuesday or the nature of the threat behind the closures beyond saying they stemmed from "extraordinary events."

The ministry didn't elaborate but the National Security Council warned Israeli and Jewish travelers Friday they could be in danger if they were in Armenia, Turkey, Egypt, Georgia, the Ivory Coast, Mali or Mauritania.

Mughniyeh, the world's most-wanted terrorist fugitive before Osama bin Laden came along, was killed Feb. 12, 2008, in Damascus when a booby-trap bomb exploded in his vehicle.

There has never been any claim of responsibility, although Mughniyeh had no shortage of enemies.

Hezbollah and Syria blamed Israel, which has been after Mughniyeh since the 1980s. Israeli agents were also deemed responsible for killing his younger brother Fuad in a December 1994 bombing in Beirut.

His other brother, Jihad, was killed in a car bombing in South Beirut in March 1985 during Lebanon's civil war. That was blamed on a rogue CIA unit.

At Mughniyeh's funeral, Nasrallah -- who has been holed up in Hezbollah hideouts since 2006 because of fears the Israelis will assassinate him -- warned Israel that Mughniyeh would be avenged.

"You killed Imad outside the battleground," he declared. "Our battle was inside Lebanese territory. Your crossed the borders. Zionists, if you want open war, let it be open war anywhere."

The Israelis say that Hezbollah has sought to mount as many as six attacks against Israeli targets outside the Jewish state in an apparent effort to avenge Mughniyeh.

These include a plot by Hezbollah and Iran's Revolutionary Guard to bomb the Israeli Embassy in Baku, capital of the former Soviet republic of Azerbaijan that neighbors Iran, Hezbollah's patron. The embassy is in the Hyatt Tower complex along with the Japanese and Thai embassies.

Two Lebanese, Ali Hassan Najam Aladinne and Mohammed Karaki, were arrested by Azeri security authorities and convicted of the bomb plot to avenge Mughniyeh, which Baku officials said was in "the advanced stages."

Each suspect was identified as a Hezbollah member; Karaki as a veteran of the movement's external operations unit and Aladinne as an explosives expert. They traveled on Iranian passports.

Investigators said the bombing was weeks away from being carried out when the Lebanese realized they were under surveillance.

Police swooped but a number of other Lebanese, Iranian and Azeri suspects fled by car to Iran. Karaki and Aladinne were both sentenced to 15 years in prison.

However, in August 2010, the pair, along with 12 Iranians held in Baku, was reportedly released in a prisoner exchange with Tehran.

Pro-Western Azerbaijan is a Muslim state but its relations with Iran are strained. The Israelis have developed close intelligence relations with Baku since the collapse of the Soviet Union two decades ago.

These include intelligence links, which the Israelis use to monitor developments in Iran, whose nuclear program they consider to be an existential threat to the Jewish state.

On April 7, 2010, a 23-year-old Israeli Arab, Rawi Fuad Sultani, was sentenced to six years in prison by a Tel Aviv court for spying on behalf of Hezbollah.

He had originally been charged with involvement in a 2009 Hezbollah plot to assassinate Chief of Staff Lt. Gen. Gabi Ashkenazi to avenge Mughniyeh. But the charge was reduced after he cooperated with authorities.

Sultani, a member of the Kfar Saba Country Club outside Tel Aviv where Ashkenazi regularly worked out in the gym, said he had been approached by a Hezbollah agent while attending a youth conference in Morocco in 2008.

Sultani's job was to report on security, Ashkenazi's bodyguards and their weapons. He was given encrypted software for secret communications with Hezbollah.

In October 2009, Turkish authorities -- then on good terms with Israel -- foiled a Hezbollah plot for a series of attacks on Israeli targets, aided by Iranian intelligence. Few details are known, although the attacks were to take place in several cities.