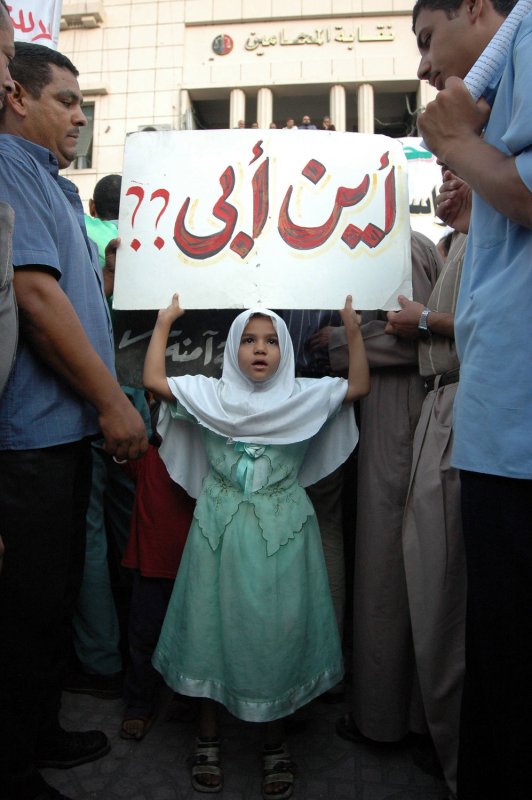 A young girl carrying a banner reading â€˜Where is my Father?â€™ at an anti-Mubarak demonstration at the Society of Lawyers in downtown Cairo on September 1, 2005. Under intense security measures and with hundreds of riot troops deployed, demonstrators from three opposition parties, including the banned Muslim Brotherhood, gathered outside the Union of Lawyers in downtown Cairo calling on the ouster of incumbent President Hosni Mubarak, the release of political prisoners and suspension of emergency (martial) law under which Egypt has been ruled for over two decades. (UPI Photo/Stewart Innes) | License Photo

CAIRO, Dec. 2 (UPI) -- A decision by the Muslim Brotherhood to pull out of Egyptian politics was made because Cairo isn't listening to the people anyway, a spokesman said.

The Muslim Brotherhood, Egypt's main opposition party, announced it was pulling its candidates from a second round of voting for parliament after gaining no seats in the first round during the weekend.

Mohamed Morsy, a spokesman for the Brotherhood, was quoted by the group's Ikhwanweb site as saying the decision was because of vote rigging and the ruling National Democratic Party's insistence that the election wouldn't be free and fair.

"The MB's withdrawal from the elections came as the regime insisted on challenging the will of the people," he said.

The group is banned from competing openly in the political process but fields its candidates as independents. They scored 20 percent of the seats in Parliament in 2005 elections.

Morsy added that despite the recent move, his group would remain present in the political environment.

The group had ignored earlier calls for a boycott, saying the best way to change the system was from within.

Washington, a key ally of Cairo, expressed frustration with the political climate in Egypt.