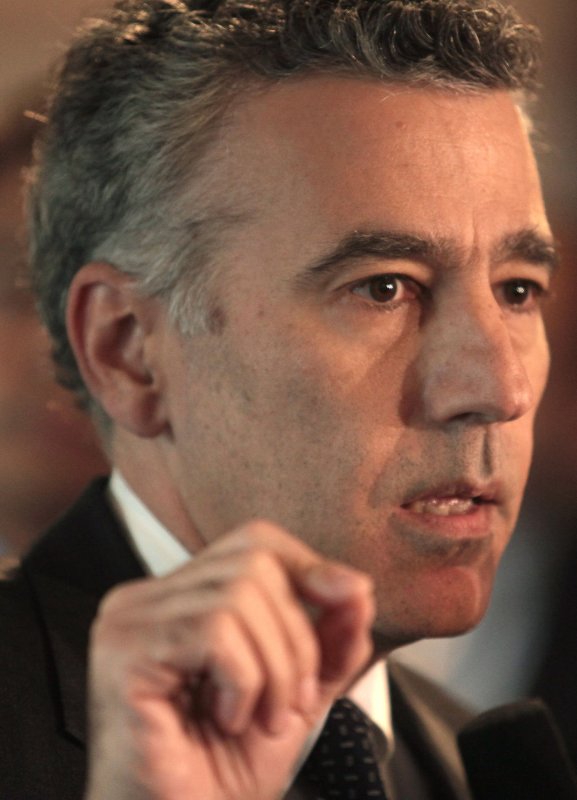 U.S. Envoy for North Korea sanctions Philip Goldberg speaks with the media after his meetings with Chinese officials in Beijing on October 20, 2009. The United States wants any bilateral talks with North Korea to result in the resumption of stalled six-country nuclear negotiations, the top U.S. diplomat for Asia said on Monday. UPI/Stephen Shaver | License Photo

U.S. President Barack Obama (L) and South Korea's President Lee Myung-bak exchange positions after realizing they were at the wrong podiums as they attend a press conference in the Rose Garden of the White House, June 16, 2009, in Washington. The leaders discussed the issue of North Korea's nuclear program, trade issues and the world economy. ( UPI Photo/Mike Theiler) | License Photo

The North Korean flag flies above its embassy, situated behind security fences, in Beijing on May 25, 2009. Senate Foreign Relations Committee Chairman John Kerry issued the following statement today on the announcement by North Korea that it has successfully completed nuclear tests: "North Korea's reckless, stubborn and persistent steps to attract international attention will never buy it the security, legitimacy and respect it seeks." (UPI Photo/Stephen Shaver) | License Photo

SEOUL, Nov. 2 (UPI) -- North Korea again urged the United States to accept its demand for direct talks on Pyongyang's nuclear programs, warning that the country will "go our own way" if Washington refuses dialogue.

In early October, North Korea said it could return to the stalled six-nation talks on its nuclear weapons drive, on condition that it first has one-on-one talks with Washington and the talks make progress.

The Obama administration has said it could have direct talks with the North but ruled out substantial negotiations on the nuclear issue, stressing that face-to-face contacts would be used as a tool to persuade Pyongyang to return to the six-party talks.

In its response to Washington's unresponsiveness, North Korea's foreign ministry said Monday that it is time for the United States to make a decision on dialogue, as Pyongyang has already expressed its position on the preconditions for the resumption of the six-party talks.

"As the DPRK (North Korea) was magnanimous enough to clarify the stand that it is possible to hold multilateral talks including the six-party talks depending on the talks with the United States, now is the U.S. turn," the ministry told Pyongyang's official news agency.

The statement came after behind-the-scenes contacts between the North and the United States failed to produce tangible progress.

Ri Gun, North Korea's deputy nuclear envoy, traveled to New York and San Diego last week for academic forums during which he met Sung Kim, the U.S. special envoy on the North's nuclear disarmament. The meeting raised media speculation that the two sides were fine-tuning conditions for a visit to Pyongyang by Stephen Bosworth, the U.S. special representative for North Korea policy, for direct talks.

But the North's foreign ministry said Ri's encounter with the U.S. nuclear envoy was "not a preliminary one for the DPRK-U.S. talks."

"No discussion has been made there on any substantial issue concerning the bilateral dialogue," it said, hinting that Pyongyang failed to gain what it wanted through the contacts. Neither North Korea nor the United States released details of the meeting.

The ministry also warned the North would "go our own way" if the United States isn't ready to sit at the negotiating table with Pyongyang, suggesting it would take further steps toward nuclear armament and long-range missile tests.

Seoul's Yonhap News Agency reported that the North has apparently restored the facility it used to produce weapons-grade plutonium at its main nuclear complex, which had been mothballed under a six-nation accord.

"The reprocessing factory appears to have been restored to its earlier condition," a senior defense official was quoted as saying, citing satellite photos that showed a continuous stream of workers in and out of the site at the North's main nuclear complex in Yongbyon.

North Korea has long called for direct talks with the United States to discuss the nuclear crisis, claiming the current standoff was caused by Washington's "hostile" policy against Pyongyang.

South Korean officials say the North wants to use one-on-one negotiations with Washington to call for a non-aggression or peace treaty between them, which could lead to a withdrawal of 28,500 U.S. troops from South Korea.

The North has also demanded that the United States scrap its nuclear umbrella over South Korea, calling it a strategy to invade the North with atomic bombs and evidence that Washington is "hostile" toward it.

Kim Tae-hyo, presidential secretary for national security strategy, dismissed the North's demands, saying the Seoul-Washington alliance should not be dealt with in nuclear negotiations.

"The alliance between South Korea and the United States, which was created long before the North's nuclear development, is not connected with the nuclear issue," Kim told a Seoul forum on Monday. "The alliance could not play any role in the denuclearization process."

Kim said South Korea aims to denuclearize North Korea no later than 2012, with its proposal of a "grand bargain" aimed at breaking Pyongyang's cyclical pattern of brinkmanship and ending the nuclear standoff.

The grand bargain calls for the North to take "irreversible" steps to dismantle its nuclear programs in return for a security guarantee and economic aid. The grand bargain initiatives feature a "one-shot" deal to trade what the North most wants for what it is most reluctant to give up, Kim said.

"The international community has spent 16 years in dealing with North Korea's nuclear issue but has failed to approach the core issue. We must set a target time frame," the presidential secretary said.